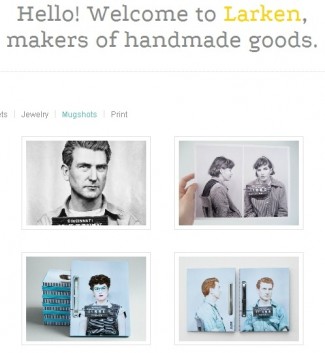 The women, Tara Finke and Megan Scherer, digitally retouched the photos to highlight certain physical features, the New York Times reports. Though the photos were taken and then discarded by the Alameda County Sheriff’s Department in California, one new version reads “Cincinnati Police Department.” The subjects’ names are not included.

Finke bought the photos about two years ago at a Nevada antiques store, the story says. So far, the women have sold about 100 items using the photos, and they’re planning to add the mug shots to tote bags. Their company is Larken Design. (Some of the mug shots can be seen on the store’s Flickr page.) “But as the business grows,” the Times says, “it raises questions with no clear answers about the legality and propriety of distributing government property like mug shots.”

The Times spoke with Ohio State law professor Peter Swire, who said the women could argue they are protected from claims of privacy violations because the First Amendment protects their publication of truthful old photos.

But Jason Schultz of the University of California at Berkeley law school cited “ongoing questions about the privacy of people listed in court records.”

“We think, ‘Wow it’s in the public record,’ but in reality if it’s in a file somewhere that you can’t Google, it remains private until we need it,” said Schultz, a director of the Samuelson Law, Technology and Public Policy Clinic at the law school. “Now that records are becoming more public, I think courts are trying to think about how to be sensitive to those interests given that they can be indexed by search engines, copied and reposted.”