4th Circuit rules use of Taser can be unconstitutionally excessive force 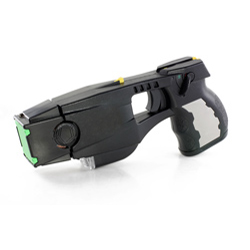 Expressly saying it wished to clarify when police may lawfully use Tasers, the Richmond, Virginia-based 4th U.S. Circuit Court of Appeals has ruled that Taser use may be unconstitutionally excessive force in some circumstances.

The ruling (PDF) says police officers from the village of Pinehurst, North Carolina, are entitled to qualified immunity from a lawsuit by the family of Ronald H. Armstrong, but nonetheless used unconstitutionally excessive force in an incident that killed him.

Armstrong had diagnoses of bipolar disorder and paranoid schizophrenia and went off his medication shortly before the 2011 incident. His sister, Jinia Armstrong Lopez, convinced him to go to the hospital after watching him poke holes in his skin to “let the air out.” A doctor there issued involuntary commitment papers, but Armstrong ran away. Pinehurst police were called.

When he learned about the commitment papers, Armstrong wrapped himself around a signpost and refused to leave. Instead of trying to talk him into leaving, the 4th Circuit said, three police officers Tased him five times over about 2 minutes. The Taser was in “drive stun mode,” a setting designed to cause pain and therefore create compliance with police orders.

It didn’t work, so the officers and two hospital security guards physically removed Armstrong from the signpost, laid him facedown on the ground and cuffed both his arms and his legs. During this struggle, Armstrong complained that he was being choked; Lopez saw officers pull on his collar. After everyone stood up, Lopez saw that Armstrong was unresponsive. When they flipped him over, his skin was blue and he wasn’t breathing. He was pronounced dead shortly after arrival at the nearby hospital.

The 4th Circuit agreed about qualified immunity, but held that Taser use can—and in this case did—nonetheless violate a suspect’s Fourth Amendment rights. Armstrong had not committed a crime, the court said, and was declared a danger only to himself. Though Armstrong was a flight risk and was resisting police, the court said the force used was greater than required.

And the use of a Taser, the court said, is very serious. Prior 4th Circuit cases have found that Taser use is proportional force only when it’s used to mitigate immediate danger. Because Armstrong posed no serious safety threat, the court said, the Taser use here was disproportionate. Furthermore, it said, using the drive-stun mode for “pain compliance” has only limited effectiveness, and is not recommended for emotionally disturbed people. The court noted that other circuits have held that Tasers can be disproportionate force when used against nonviolent resistance, and that its own precedent on other police weapons supports the same conclusion about Tasers.

“At bottom, ‘physical resistance’ is not synonymous with ‘risk of immediate danger,’” the court wrote.

However, because the rules for Taser use were “an evolving field of law” at the time of the incident, the court said, it would grant the officers qualified immunity. “Law enforcement officers should now be on notice” that using a Taser against someone like Armstrong violates the Fourth Amendment, it concluded.

Judge J. Harvie Wilkinson III wrote separately to agree with the qualified immunity ruling but argue that there was no need to decide the excessive force issue.