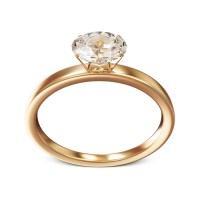 A 6-plus carat diamond engagement ring that led to an Arizona lawyer’s prison sentence is going up for auction.

The ring, once intended for the fiancee of Scottsdale lawyer Scott Maasen, will be put up for bid on Dec. 5, the Arizona Republic reports.

Maasen admitted in an April guilty plea that he hid his purchase of the $90,000 ring from the court overseeing his bankruptcy. He was sentenced last week, but he won’t begin his sentence until Jan. 11. The Arizona Republic covered the proceedings here and here.

In addition to serving time in prison, Massen will have to repay $1.4 million to the Small Business Administration in connection with a mostly forgiven loan he used to buy a Scottsdale condo for his law firm.

Maasen, a former Maricopa County prosecutor, was originally charged with 12 counts that included conspiracy and fraudulent transfer of property. The hidden ring was not the only allegation.

Prosecutors had alleged that Maasen bought a $1.1 million home and put it in his father’s name shortly before filing bankruptcy in 2009. They also alleged he applied for a $725,000 mortgage to buy a $1.2 million home in 2012 at the same time he said he couldn’t repay the SBA loan. Maasen had settled a $1.5 million SBA loan for $450,000 in 2012. He transferred the second home to his father shortly after he bought it, prosecutors said.

Maasen’s father and the fiancee also were charged, but federal prosecutors agreed to drop those charges in their plea agreement with Maasen. Maasen’s plea agreement says the father and onetime fiancee must agree to the forfeiture of certain real property as part of the agreement.

Maasen was suspended from law practice in October.

Maasen’s lawyers had sought a sentence of probation, saying he already was subject to a “self-imposed life sentence.” In their sentencing memorandum, the lawyers said Maasen had lost his career and custody of his two daughters as a result of his actions.