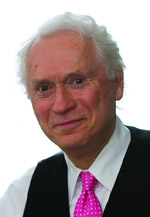 Terence Evans, 71, was with his family at the University of Chicago Medical Center when he died of idiopathic pulmonary fibrosis and acute respiratory distress syndrome, according to the Milwaukee Journal Sentinel and a statement from Chief Judge Frank H. Easterbrook of the Chicago-based 7th U.S. Circuit Court of Appeals.

“His sudden decline was a shock to all who knew this athletic, outgoing and witty man,” says Easterbrook in a statement provided to the ABA Journal. “People can reasonably debate whether he was better at golf or at law; his friends know that he did both very well indeed.”

Known for rising from humble beginnings as the child of a single mother growing up in Milwaukee, his sense of humor and a knack for including pop-culture references in his opinions, Evans will indeed be missed, another 7th Circuit jurist tells the newspaper.

“We, his court family, are devastated,” said Judge Diane S. Sykes, who formerly clerked for Evans.

“What his colleagues remember of him, in addition to his energy and his commitment to equal justice under law, was his joie de vivre,” writes Easterbrook. “He was irrepressible, which lifted everyone’s spirits.

An earlier Journal Sentinel article written when Evans announced his intention to take senior status, takes note of the judge’s lighthearted approach to an apparent typo in a court transcript.

“A ‘hoe,’ of course, is a tool used for weeding and gardening,” Evans wrote in a 2005 appellate opinion. “We think the court reporter, unfamiliar with rap music (perhaps thankfully so), misunderstood Hayden’s response. We have taken the liberty of changing ‘hoe’ to ‘ho,’ a staple of rap music vernacular as, for example, when Ludacris raps ‘You doin’ ho activities with ho tendencies.’

However, such writing wasn’t simply intended to be funny but also helped the judge make court rulings more understandable to nonlawyers, the article notes.

Evans could also be stern, communicating the need to speed it up to repetitive lawyers, for instance, with just a look, colleagues say.

“He was always three steps ahead of the lawyers. He knew what was coming,” his longtime clerk Judy Donegan told the newspaper in 2009, describing Evans as respectful, kind and direct as he orchestrated court proceedings. “He was a master chess player in the trial court,” she said.

Chicago appellate lawyer Steve Sanders, another former clerk for Evans, talks about his memories of the judge in a post today on the University of Chicago Law School’s Faculty Blog.

Evans, who was a 1967 graduate of Marquette University Law School, was a member of the federal bench for over 30 years.

After serving as a law clerk to Justice Horace Wilkie of the Wisconsin Supreme Court, he became an assistant Milwaukee County district attorney before moving on to private law practice and a seat on the state-court bench.

In 1980, he was appointed to a seat on the U.S. District Court for the Eastern District of Wisconsin.

“His service there, including a stint as chief judge, ended in 1995 with his promotion to the court of appeals,” Easterbrook wrote. “He took senior status in 2010, after 30 years of active service to the federal judiciary, so that he could spend more time with his family and his golf game, but he continued to hear a substantial caseload. While on the district court, he selected Diane S. Sykes as a law clerk; she became his colleague on the 7th Circuit in 2004.”

Funeral arrangements for the judge are pending, and the 7th Circuit plans to hold a memorial service later this year.

ABAJournal.com: “7th Circuit: Landlord Who Rented to Murder Suspect Has No Constitutional Claim for Property Damage”