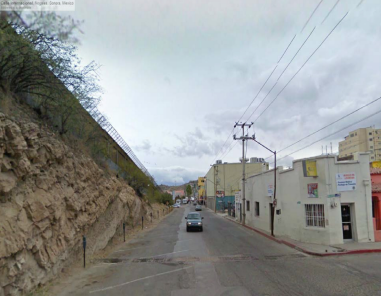 A screenshot taken from the San Francisco-based 9th U.S. Circuit Court of Appeals ruling showing the road where Jose Antonio Elena Rodríguez was shot. The U.S. side of the border is to the left.

A federal appeals court has ruled that a border patrol agent who was on U.S. soil when he shot and killed a teenager in Mexico can be sued for the alleged Fourth Amendment violation.

The San Francisco-based 9th U.S. Circuit Court of Appeals ruled 2-1 on Tuesday that border patrol agent Lonnie Swartz could be sued for civil damages by the mother of the slain teen, Jose Antonio Elena Rodríguez, report Politico and Reuters.

Swartz has contended he fired his gun in self-defense when a crowd began throwing rocks. Jurors acquitted Swartz in a criminal trial in April on a charge of second-degree murder, but deadlocked on manslaughter charges. He is scheduled to be retried for manslaughter in October.

“The court made clear that the Constitution does not stop at the border and that agents should not have constitutional immunity to fatally shoot Mexican teenagers on the other side of the border fence,” Gelernt said in the release.

The mother, Araceli Rodríguez, had alleged her 16-year-old son was walking peacefully down a street in Nogales, Mexico, when Swartz fatally shot him without warning or provocation.

The 9th Circuit said the mother could pursue a Fourth Amendment claim based on the facts alleged in her lawsuit. The court noted that qualified immunity protects public officials from civil suit if their conduct doesn’t violate clearly established constitutional rights. Swartz’s alleged conduct didn’t qualify for protection, the court said.

“It is inconceivable that any reasonable officer could have thought that he or she could kill J.A. for no reason,” the majority said in an opinion by Circuit Judge Andrew Kleinfeld.

The majority also ruled that the Fourth Amendment applies even though the teen was in Mexico when he was shot. “Applying the Constitution in this case would simply say that American officers must not shoot innocent, non-threatening people for no reason,” Kleinfeld wrote.

The majority cautioned that is was ruling based on the lawsuit allegations, and the facts could still show that the shooting was excusable or justified.

Circuit Judge Milan Smith dissented in an opinion that said Congress, not the courts, should determine whether a suit for damages is allowed. “In holding to the contrary” Smith wrote, “the majority creates a circuit split, oversteps separation-of-powers principles, and disregards Supreme Court law.”

The case is Rodriguez v. Swartz.