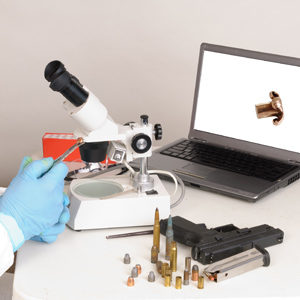 In an error now admitted by the prosecution, a Washington, D.C., police forensics expert incorrectly testified that a match between bullet slugs found in a murder victim’s vehicle and a gun found in the bedroom of Marlon Williams was absolute.

“Those markings are unique to that gun and that gun only,” the expert testified.

But because a defense lawyer for Williams failed to object at trial, his conviction in the 2010 slaying stands, reports the Washington Post (reg. req.).

That’s why a court rule is needed banning such statements, says Judge Catharine Easterly of the D.C. Court of Appeals in a concurrence in the Thursday opinion upholding Williams’ conviction.

Calling such claims of precise ballistics matches to “the vision of a psychic” offering testimony of “foundation­less faith in what he believes to be true,” Easterly said the court “cannot be complicit in their use.”

Contrary to many pop culture portrayals of ballistic evidence, two National Research Council panels have concluded that there “is no statistical basis to determine how often bullets fired by different weapons might look alike, or even whether a firearm makes a unique, reproducible mark,” the Washington Post reports.

Attorney Enid Hinkes is representing Williams in the appeal. She said she intends to seek an en ban hearing on her client’s conviction before the full appeals court.

“Judge Easterly’s concurring opinion is an accurate statement of the science—or the lack of it,” she told the newspaper. “But, unfortunately, it was not translated into action.”