In honor of RBG's birthday, Northwestern releases video with songs about the late justice 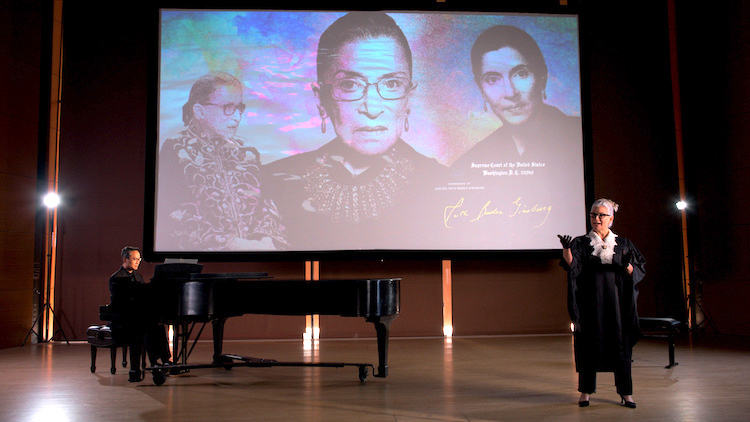 Patrice Michaels (left) and pianist Kuang-Hao Huang during the filming of the documentary about the late U.S. Supreme Court Justice Ruth Bader Ginsburg. Photo courtesy of the Bienen School of Music at Northwestern University.

Tribute to Justice Ruth Bader Ginsburg in Song, a documentary about Ruth Bader Ginsburg, looking at the late U.S. Supreme Court justice’s personal side, was released Monday by the Bienen School of Music at Northwestern University.

March 15 is the late justice’s birthday, and when she turned 80, her children and daughter-in-law gave her a gift of commissioned songs about her life as a lawyer, judge, daughter, wife and mother. Pieces performed in the video documentary can also be heard on Notorious RBG in Song, a 2018 release from her son Jim Ginsburg’s classical label, Cedille Records.

The songs are sung by his Jim Ginsburg’s wife, Patrice Michaels, a soprano who teaches at Northwestern. In the documentary, Michaels shares the thank-you letter Ginsburg sent her for the present.

“With appreciation for making 80 feel like 50, and love only music can convey,” Ginsburg wrote.