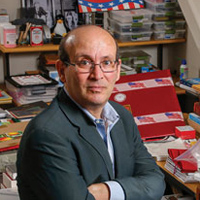 Carl Malamud is the founder of Public.Resource.org. Photo by Tony Avelar.

Corrected: A nonprofit founded by Carl Malamud, a 2009 ABA Journal Legal Rebel who was once described by the New York Times as a “self-styled Robin Hood of the information age,” has been sued by the state of Georgia.

Public.Resource.Org is accused of violating copyright law by distributing the Official Code of Georgia Annotated on the Internet, reports Techdirt. Malamud is president of the group and is known for his campaigns to make statutes, case decisions and government documents freely available to the public.

The state is not asserting that it is a copyright violation to publish the text of the statutes themselves, “since the laws of Georgia are and should be free to the public.” However, Public.Resource.Org has no right to republish the annotated version of Georgia’s code, which is created by a third-party legal publisher as a work for hire under contract with the state legislature, alleges the complaint (PDF). It was filed Tuesday in federal district court in Atlanta.

As part of the contract, LexisNexis makes the text of the Georgia statutes freely available online at www.legis.ga.gov, the state notes. But Malamud and his group want more and have downloaded copyrighted material in an effort to push for greater access, the suit contends:

“Defendant is employing a deliberate strategy of copying and posting large document archives such as the OCGA (including the copyrighted annotations) in order to force the State of Georgia to provide the OCGA, in an electronic format acceptable to Defendant. Defendant’s founder and president, Carl Malamud, has indicated that this type of strategy has been a successful form of ‘terrorism’ that he has employed in the past to force government entities to publish documents on Malamud’s terms.”

Georgia is seeking a court order prohibiting both copying and use of its copyrighted material in derivative works. The suit also seeks seizure of infringing material and attorney’s fees and costs.

ABA Journal: “Who Owns the Law?”

Corrected on July 27 to reflect that Malamud is not a lawyer.