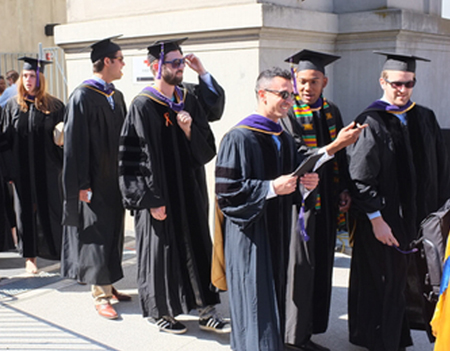 Graduates file into the Greek Theater for the University of California Berkley law school commencement exercises in 2012./Richard Thornton (Shutterstock.com)

Corrected: University of California at Berkeley School of Law reduced its budget by $2 million and will eliminate some of its associate dean positions in the face of university-wide cutbacks, the Daily Californian reports.

Carol Christ, who took over as chancellor July 1, unveiled a plan to reduce the university’s deficit from $110 million to $56 million when she released her budget for the new fiscal year Thursday, according to KQED.

Christ’s plan calls for $20 million in cuts to academic, research and administrative positions.

According to a Berkeley Law spokesperson, the school reduced its budget by 2 percent in accordance with a campuswide request, but the law school’s overall budget for the coming year actually went up 6 percent. “Not only that, fundraising is up about nine percent over the prior period; our applications have increased by about two percent for the second year in a row; we’ve hired five new faculty—beating out competing offers from top schools,” said the Berkeley Law spokesperson, in an email. “The academic profile of the incoming class improved, as did the geographic diversity.”

Berkeley Law dropped four spots to No. 12 in U.S. News & World Report Best Law School rankings for 2018 when they were released in March. The Daily Californian reported that it marked the first time the school sat outside the top 10 since 2005. The drop also occurred about a year after former dean Sujit Choudhry resigned after a sexual harassment complaint lodged by his former assistant.

Erwin Chemerinsky, who took over as Berkeley’s law dean July 1, told the student-run newspaper that the rankings drop and budget cuts were not related.

“A tuition freeze, maintaining the size of our faculty, and inflationary increases in operating costs were the main factors,” he said, adding that “our entering class this year is as strong as it’s ever been.”

Out of the law school’s 239 graduates sitting for the July 2016 California Bar Exam, 82 percent passed, according to a supplemental statistics report (PDF) posted on TaxProf Blog.

Corrected headline at 9:50 p.m. on Aug. 25. Updated to include comment from University of Berkeley Law School spokesperson.