Want to be more productive? New desk lets user work while lying down 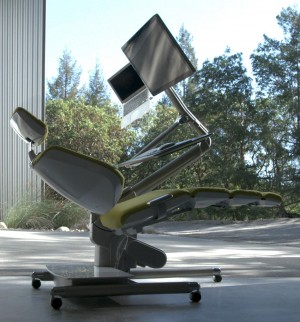 Want to be more productive? The answer, counterintuitively, may be to work in a reclining position.

So says Che Voight, the CEO of Altwork, a company that makes computer desks that will permit high-intensity users to do exactly that.

In a Wednesday news release, it announced that the new Altwork Station—which allows users to work in an almost unlimited number of positions, from standing to a full recline—is now available at a preorder price of $3,900. The regular price is $5,900.

Some who have tested out the new desk offered rave reviews about the opportunity to work while lying down. The desk automatically moves the user’s computer, which is attached by magnets, in conjunction with the position of the padded dentist-office-like chair,

“The solution works—I was staring up at my computer, comfortably using my mouse, feeling like I’m floating,” writes Molly McHugh in Wired. “It’s a very, very comfortable way to be, and I’m definitely focused, sort of in my own world, alone with whatever is on my screen.”

The desk can be used in multiple positions and allows users to preprogram up to four favorites.

“What’s really interesting is that when people get in a reclined state, they seem to be more focused on their work,” Voight tells USA Today. “And somehow that position also telegraphs to others that you’re busy and shouldn’t be bothered.”

At that point, he says, “you really have that cocoon effect where you’re just hyper-focused on what’s in front of you.”

ABAJournal.com: “Some GrayRobinson lawyers give up traditional desks and keep it moving”