A Corporation Is Not a Person for Car Pool Lane Purposes, Calif. Judge Rules 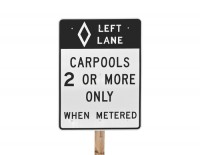 A corporation is considered a person under the law of California (and numerous other states). But that doesn’t mean a corporation counts as a passenger when it comes to satisfying a car pool lane requirement that a vehicle contain two or more people, a California judge has ruled.

Jonathan Frieman handed a California Highway Patrol officer incorporation papers from the passenger seat in October, when he was pulled over for the apparent vehicle-occupancy violation, the San Francisco Chronicle reports. But the officer was not convinced that a corporate passenger was present in Frieman’s vehicle and told the 56-year-old San Rafael resident he would have to tell it to the judge.

Despite the assistance of an attorney, who argued on Frieman’s behalf at a Monday hearing that freeway signs requiring “2 or more persons” in car pool lanes are unconstitutionally vague, a Marin County Superior Court judge wasn’t convinced either.

Rejecting the argument by attorney Ford Greene, traffic referee Frank Drago said the underlying purpose of the law shows why a corporation, even if a person, is not a passenger.

“Common sense says carrying a sheath of papers in the front seat does not relieve traffic congestion,” Drago told Frieman. “And so I’m finding you guilty.”

Frieman plans to appeal the ruling.