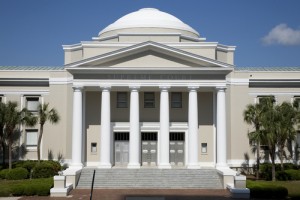 The Florida Supreme Court on Friday ruled that juries must be unanimous in recommending the death penalty.

Then state supreme court ruled (PDF) in Hurst v. Florida that all the jury findings necessary to impose a death sentence must be unanimous. The court was considering the case on remand from the U.S. Supreme Court, which had ruled in January that the state’s prior death penalty law was unconstitutional because it allowed judges to decide aggravating factors meriting the death penalty.

Florida lawmakers had replaced the overturned law with a new one requiring jurors to recommend death sentences on at least a 10-2 vote.

The state supreme court cited the Florida Constitution and the state’s “longstanding history requiring unanimous jury verdicts as to the elements of a crime.” The court also said the decision was required by the Eighth Amendment, although the U.S. Supreme Court hadn’t yet ruled on whether unanimity is required for jury death-sentence recommendations.

The opinion noted that Florida is one of only three states—the others are Delaware and Alabama—that don’t require unanimous jury recommendations for a capital sentence. The Delaware Supreme Court, however, overturned the death penalty law because it didn’t require unanimity on aggravating factors and allowed judges rather than jurors to weigh aggravating and mitigating factors.