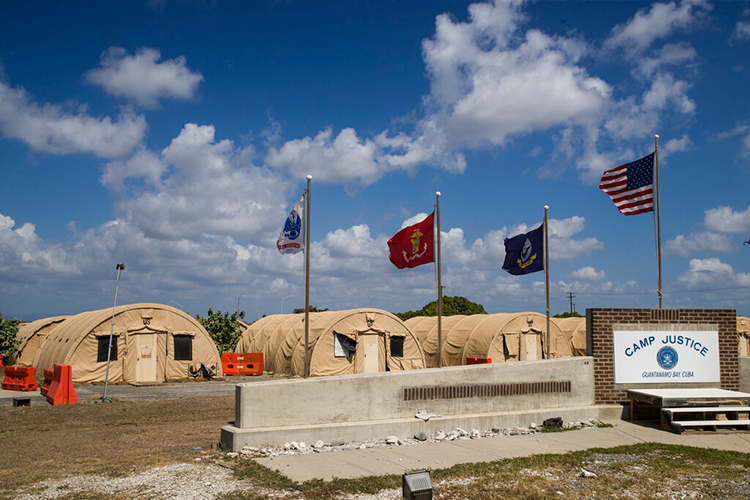 Flags fly in front of the tents of Camp Justice in the Guantanamo Bay Naval Base, Cuba. (AP Photo/Alex Brandon, File)

A Yemeni citizen who allegedly maintained contact with several affiliates of Al Qaeda and two associated terrorist organizations until he was brought to Guantanamo Bay in 2004 is entitled to due process in the hearing challenging his detention, the ABA told the U.S. Court of Appeals for the District of Columbia Circuit on Friday.

In an amicus brief filed in Al Hela v. Biden, the ABA noted that the U.S. Constitution’s Due Process Clause requires the government to provide basic safeguards before depriving individuals—including those held at Guantanamo Bay—of their physical liberty in a court proceeding or before detaining them for extended periods of time. A press release is available.

The ABA also said the U.S. Supreme Court’s 2008 decision in Boumediene v. Bush held that the Suspension Clause had full effect at Guantanamo Bay, confirming that it should be treated “as de facto U.S. territory for purposes of constitutional adjudication.”

“The very premise of our adversarial system is that one-sided determinations generally present an intolerably high risk of error,” the association wrote in its brief. “As applied here, due process requires that Petitioner’s habeas proceedings include at least two specific procedural protections: the opportunity for his security-cleared counsel to view the evidence on which his detention rests, and the exclusion of unreliable and unchallengeable hearsay evidence.

“The ABA accordingly believes that the case should be remanded for further proceedings consistent with these due process rights.”

Abdulsalam Ali Abdulrahman Al Hela filed a writ of habeas corpus in 2005. Despite the Supreme Court’s Boumediene decision, the U.S. District Court for the District of Columbia denied the writ after a full hearing on the merits in 2016.

A three-judge panel of the D.C. Circuit affirmed the decision in August, holding that the president had the authority to detain Al Hela and the district court’s proceedings complied with the Suspension Clause. The panel also said it rejected Al Hela’s due process claims “because the Due Process Clause may not be invoked by aliens without property or presence in the sovereign territory of the United States.”

The D.C. Circuit granted Al Hela’s petition for rehearing en banc in April. Oral arguments in the case are scheduled for Sept. 30.

The ABA has long advocated for policies that protect the due process rights of individuals detained by the government in criminal and immigration matters.

According to its brief, the association expanded these efforts into antiterrorism matters after the Sept. 11 terrorist attacks. It created a Task Force on the Treatment of Enemy Combatants and promoted fair treatment for individuals detained at Guantanamo Bay.

The ABA adopted a resolution urging the U.S. government to ensure that detainees held at Guantanamo Bay and charged with violations of criminal law be prosecuted in Article III federal courts unless the attorney general certifies that they must be tried in other kinds of federal tribunals. The 2009 resolution also urged the federal government to ensure that all others are granted habeas corpus hearings with full due process rights and access to counsel.

The association had also filed an amicus brief in Boumediene, arguing that “limiting habeas rights not only would undermine the moral authority of the United States in promoting the rule of law, but would also have negative effects on the treatment of Americans abroad, our nation’s ability to ensure fidelity to international agreements to which the United States is a party, and needed international cooperation in the fight against terrorism.”

In its brief in Al Hela, the ABA reiterated that it has “consistently opposed prolonged detentions without due process.”

“Thus the ABA has a critical interest in ensuring that the issues involved in this case are resolved in a way that protects individual liberty and fairness, while giving proper weight to legitimate concerns such as national security,” the association said.