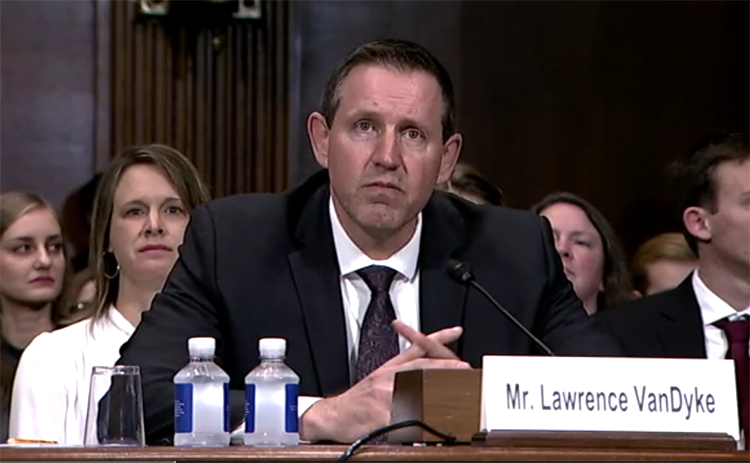 Lawrence VanDyke appears before the Senate Judiciary Committee on Oct. 30.

Federal appeals court nominee Lawrence VanDyke is experienced and "clearly smart," but his accomplishments are offset by negative qualities that emerged in a review of his professional qualifications, according to a letter by the ABA Standing Committee on the Federal Judiciary.

The letter explains why a substantial majority of the standing committee gave a “not qualified” rating to VanDyke, a nominee to the San Francisco-based 9th U.S. Circuit Court of Appeals.

According to the letter, judges and lawyers interviewed about VanDyke reported that he is “arrogant,” “lazy” and an “ideologue.” The letter also referred to a theme of an “entitlement temperament” that emerged in the standing committee review.

The letter was written by William C. Hubbard, chair of the standing committee and a past president of the ABA. The letter was addressed to the leaders of the Senate Judiciary Committee. The Senate committee heard from five federal judicial nominees in a hearing Wednesday, including VanDyke; the other four nominees were given “well qualified” or “qualified” ratings by the ABA standing committee. Patrick Bumatay, another 9th Circuit nominee appearing at the Wednesday hearing, was unanimously rated “qualified.”

“Mr. VanDyke’s accomplishments are offset by the assessments of interviewees that Mr. VanDyke is arrogant, lazy, an ideologue, and lacking in knowledge of the day-to-day practice, including procedural rules. There was a theme that the nominee lacks humility, has an ‘entitlement’ temperament, does not have an open mind, and does not always have a commitment to being candid and truthful,” the letter said.

“Even though Mr. VanDyke is clearly smart, comments were made that in some oral arguments he missed issues fundamental to the analysis of the case. There were reports that his preparation and performance were lacking in some cases in which he did not have a particular personal or political interest.”

The standing committee report is partly based on interviews with 60 people—43 lawyers, 16 judges and one other person—who have worked with VanDyke and who are in a position to evaluate his professional qualifications, the letter said.

The committee evaluator also obtained detailed background materials, including more than 600 pages of publicly produced emails involving or written by VanDyke, news reports in which he was interviewed, and articles and opinions written about him.

A former standing committee chair conducted a supplemental review of VanDyke under a procedure that requires a second evaluation when a not qualified rating is likely.

According to an ABA backgrounder, “Standing Committee On The Federal Judiciary: What It Is And How It Works,” the standing committee’s evaluation of judicial temperament takes into account open-mindedness, courtesy, patience, freedom from bias, and commitment to equal justice under the law. The evaluation of professional competence includes the nominee’s judgment.

The letter said VanDyke’s not qualified rating was based on those principles.

VanDyke appeared Wednesday before the Senate Judiciary Committee. He told senators he received the standing committee’s letter Tuesday evening. “I’m think I’m still processing it,” he said. “I obviously don’t agree with [it] and I don’t think that that those comments are reflective of the people that I worked with throughout my career.”

VanDyke paused for about 15 seconds and started to cry when he was asked about refusing to affirmatively say he would be fair to members of the LGBTQ community, according to Washington Post coverage.

“I did not say that,” he said. “It is a fundamental belief of mine that all people are created in the image of God, and they should all be treated with dignity and respect.”

As part of the standing committee’s standard process, nominees like VanDyke are provided with any negative allegations against them and offered the opportunity to respond to them prior to the committee taking a final vote on their rating. The letter states that VanDyke did meet with an evaluator, and “the negative issues discussed in this letter were thoroughly discussed with interviewees and vetted with the nominee.”

Carrie Severino, chief counsel and policy director of the conservative advocacy group Judicial Crisis Network, criticized the ABA rating in a National Review op-ed. “The ABA has amassed quite the history of bias against conservatives over the last few decades, but with VanDyke, it has really outdone itself,” she wrote.

Severino said the lead evaluator for the ABA on VanDyke’s nomination once contributed $150 to VanDyke’s opponent in a race for a seat on the Montana Supreme Court. The evaluator has also made other campaign contributions, but none was for a Republican, Severino said. She says that the contribution was made in 2014 to Justice Michael Wheat, the incumbent. Wheat won his re-election, and VanDyke went on to become the solicitor general of Nevada.

The 15 members of the Standing Committee on the Federal Judiciary and its chair commit to not participate in or donate to federal political campaigns during their staggered three-year terms on the committee. More details about the committee’s requirements and processes can be found in the 30-page backgrounder.

Of the 115 evaluations that the standing committee has completed on judicial candidates nominated since January, 80 were voted well qualified, 32 were voted qualified, and three have been voted not qualified. Trump has nominated eight people to the 9th Circuit in 2019; VanDyke was the only one rated not qualified. Bridget S. Bade, Eric D. Miller, Daniel P. Collins, Kenneth K. Lee and Danielle J. Hunsaker were rated well qualified; Daniel Aaron Bress and Bumatay were rated qualified.

“The American Bar Association’s Standing Committee on the Federal Judiciary issued a rating of ‘not qualified’ to Lawrence VanDyke, a nominee to the United States Court of Appeals for the 9th Circuit.

“The Standing Committee bases its evaluations solely on a review of integrity, professional competence, and judicial temperament. The committee’s work is insulated from, and independent of, all other activities of the ABA and its leadership.

“The evaluations are narrowly focused, nonpartisan, and structured to assure a fair and impartial process. No nominee gets a ‘not qualified’ rating without another review.

“During the current administration, the ABA Standing Committee has conducted 264 ratings and issued ‘well qualified’ or ‘qualified’ ratings to 255— 97%—of those individuals.

“The ABA believes that it has a responsibility to the Senate, the public, and the profession to conduct evaluations that help assure an eminently qualified judiciary to individuals being considered for lifetime appointments.”