ABA Annual to Feature a High Court Justice, Top Lawyers, Famous Authors and a Battle of the Bands 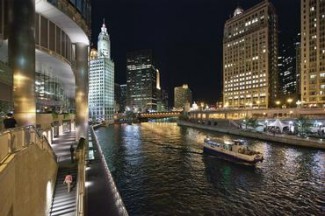 Whenever the ABA returns to Chicago for its Annual Meeting, the event feels something like a homecoming.

That feeling should come as no surprise, considering the ABA is headquartered in Chicago–on Clark Street overlooking the Chicago River, just a short walk from the cluster of hotels off Michigan Avenue where most Annual Meeting events will take place. The meeting opens officially Thursday and runs through Tuesday.

Chicago is one of the more frequent stops on the ABA’s circuit of cities that host the Annual Meeting. This year will mark the seventh time Chicago has hosted the Annual Meeting since 1980. That will tie Chicago with San Francisco as the most frequent host of annual meetings during that time period. San Francisco will jump ahead again next year when it hosts the 2013 Annual Meeting, but Chicago also has hosted three midyear meetings in defiance of the city’s winter climate. As of Tuesday, there were more than 7,500 people registered for the meeting.

The Annual Meeting’s Chicago location this year will make it a particularly memorable coincidence for Laurel G. Bellows, a native of the North Side who will start her one-year term as ABA president next week when she is introduced to the House of Delegates. The House, which sets policy for the association, is scheduled to meet on Monday and Tuesday at the Hyatt Regency Chicago, the headquarters hotel for this year’s meeting.

Bellows will be the first person since at least 1970 to become ABA president in their home city. In an interview earlier this week with the ABA Journal, Bellows said she will savor the moment. “Chicago is my town, I love the city,” she said. “I’m really thrilled to be taking office here, and to highlight the city at the same time.”

A number of other events at the Annual Meeting also will have a Chicago flavor. A number of local leaders in politics, law and the arts will be speaking at various continuing education panels, including Anthony Freund, general director of the Lyric Opera; Cook County States Attorney Anita Alvarez; M. Cherif Bassiouni, president emeritus of the International Human Rights Institute at DePaul University College of Law; Dan Webb, former U.S. attorney for the Northern District of Illinois; attorney and bestselling author Scott Turow; and the Rev. Jesse Jackson.

U.S. Supreme Court Justice Ruth Bader Ginsburg also will be speaking at the Annual Meeting. A noted opera buff, Ginsburg is scheduled to speak Friday morning at a program on how the practice of law can be enhanced by an appreciation for opera. Later that day, she is slated to participate (with Bassiouni and Israeli Supreme Court Justice Salim Joubran) in a program comparing constitutional law in North America and the Middle East.

All told, 1,496 individual events will be held during the Annual Meeting. That includes 191 CLE programs, making the Annual Meeting perhaps the largest concentration of educational offerings for lawyers at any one time and place. In addition, the ABA Expo, located near the registration area in the Hyatt Regency, features 65 vendors offering information on ABA membership benefits, travel services and destinations, and companies serving the legal profession. The Expo will be open from 10 a.m. to 4 p.m. on Thursday and Friday, and 10 a.m. to 2 p.m. on Saturday. (At the ABA Publishing booth, look for ABA Journal staff handing out copies of the August issue and taking questions.)

On Saturday, the Opening Assembly and President’s Reception will both be held in distinctive Chicago venues. U.S. Sen. Lindsey Graham, R-S.C., will be the keynote speaker at the Opening Assembly, which starts at 5:30 p.m. at Symphony Center on Michigan Avenue, the home of the esteemed Chicago Symphony Orchestra. Immediately following the Opening Assembly, the President’s Reception will be held in the new modern wing of the Art Institute just up the street from Symphony Center. The reception will include, for the first time ever, a battle of the bands featuring five groups from around the country that are made up primarily of lawyers. A voting procedure will select the top three bands, which will receive cash prizes.

And for those who like their music and venues even more on the edge, the Lollapalooza music festival will be drawing huge crowds to Grant Park all weekend. If you plan to go, get in touch with us and share your experience.