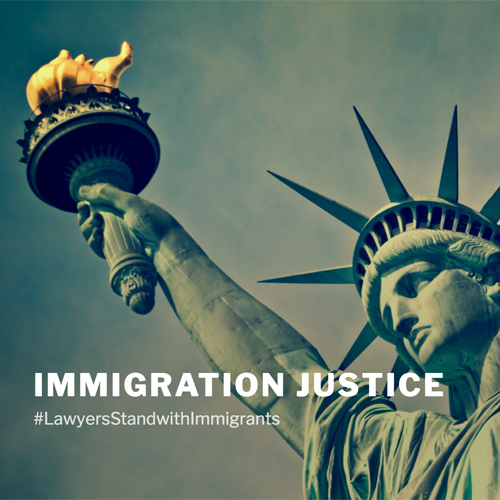 On Friday afternoon, at the ABA Midyear Meeting in Miami, the Law Practice Division’s Futures Initiative sat down to an agenda it had planned for three months.

But it abandoned that agenda entirely after member Reid Trautz, the practice management adviser for the American Immigration Lawyers Association, mentioned that AILA has had trouble coordinating a flood of pro bono offers since the Trump administration’s executive order banning entry to citizens of seven Muslim-majority countries for 90 days and halting the U.S. refugee program. AILA wanted to make a website for this purpose, he said, but he had been stymied by the process of creating it.

“The committee said collectively, ‘Man, we could help you with that,’ ” says Ed Walters, CEO of online legal research company Fastcase, a member of the initiative and a member of the advisory board for the ABA Center for Innovation. “We basically threw away the agenda for that meeting and said ‘Let’s [do it] immediately.’ ”

They did. Over the next several hours, the Futures Initiative and the Center for Innovation created ImmigrationJustice.us, a portal for attorneys and others responding to the executive order. People interested in volunteering their legal or language expertise can sign up there to work on behalf of affected immigrants. Attorneys and members of the public can also find information there on the travel ban and other immigration-related issues, such as habeas corpus and detention. The site also provides resources for attorneys working on those issues and more. AILA has already taken up the website, Walters says, and it is further customizing it.

Because this conversation took place at the midyear meeting, much of the work was done from a hotel conference room, says Chad Burton, chair of the Futures Initiative, a member of the governing council of the Center for Innovation and CEO of CuroLegal. Walters says there was a design session Saturday morning. Members, along with an ABA staffer, worked on it throughout the course of the day.

Walters says the idea was to create a “minimally viable product,” something that will work until AILA can flesh it out further. Burton and Walters both lead legal technology companies—and the team included people from Avvo and Lawyerist—but Walters stresses that no software developers were involved; the team was “a handful of lawyers.” And the cost of the website—including purchasing the domain, hosting and images—was less than the cost of lunch, he says.

“The Law Practice Division Futures Committee and the ABA Center for Innovation did fabulous work producing a website in one afternoon that will help lawyers assist more people in need,” Klein said. “This is not a one-time project. This is a new model that will enable us to respond to events quickly—so the association and our members can make a difference for use in future emergencies.”

The ABA Fund for Justice and Education is setting up a fund for financial donations to the legal response to the executive order. Interested donors can visit the FJE’s website.

The Futures Initiative team documented its work in a short guide to rapid website deployment, which will be hosted by the Center for Innovation. The goal is to help organizations respond quickly to future emergencies—including natural disasters as well as courtroom emergencies.

Walters believes this kind of fast work is “the new ABA”—using technology to amplify and accelerate legal work.

“We documented the process so that the next time … someone will have spelled out the steps in a couple of hours,” Walters says. It’s a “very software-development way of thinking about how to solve the problem.”