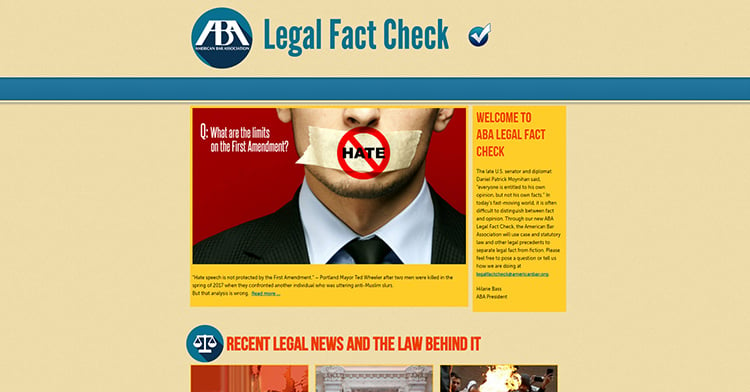 On Thursday, the ABA announced the launch of a new online resource, ABA Legal Fact Check.

“In a world with multiple sources of information, it is often difficult to distinguish between fact and opinion,” said ABA President Hilarie Bass in a press release. “Through our new ABA Legal Fact Check, the American Bar Association will use case and statutory law and other legal precedents to help set the record straight by providing the real facts about the law.”

Bass has made ABA Legal Fact Check one of her first initiatives as ABA president. She assumed office at the close of the 2017 ABA Annual Meeting on Tuesday.

“The concept is simple,” Bass told the ABA House of Delegates during a Monday speech. “In an era of alternative news and fake facts, the ABA should be the definitive source of real facts when it comes to the law.”

ABA Legal Fact Check is intended to be a resource for the public, including the news media, to be informed of what the law says about the issues surrounding current events.

The first posts on the site address topics such as the the First Amendment and hate speech; a president’s authority to issue pardons; whether a federal judicial circuit could be broken up; and the constitutionality of affirmative action in college admissions.