ABA Medal will be awarded to John Feerick, who helped draft the 25th Amendment 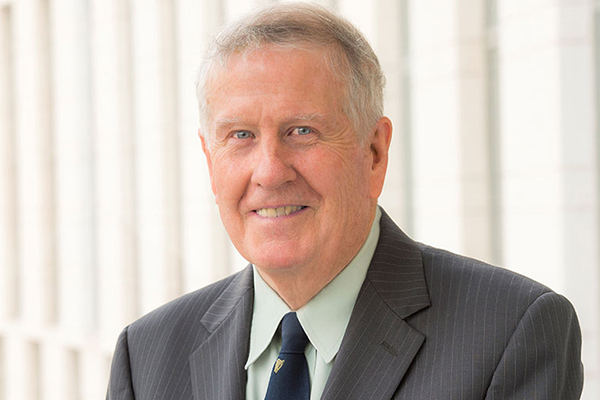 The ABA's highest honor, the ABA Medal, will be awarded to a Fordham University School of Law professor who helped to draft the 25th Amendment.

John Feerick, 80, is a U.S. Army veteran and served as dean of his alma mater Fordham Law from 1982 to 2002. He still serves as senior counsel to the Feerick Center for Social Justice, which was established by Fordham in his name in 2006.

In 1964, only three years after he earned his law degree, an article that Feerick wrote for the Fordham Law Review on the gaps in the presidential succession process caught the eye of the ABA. In the aftermath of President John F. Kennedy’s assasination, the line of succession was a great concern. Feerick was asked by the ABA to help draft a constitutional amendment to establish a succession process should the president be disabled or the office of the vice president need to be filled. This became the 25th Amendment, which was ratified 50 years ago.

At the time the 25th Amendment was being drafted, Feerick was working at Skadden, Arps, Slate, Meagher & Flom. He later became a partner in the firm, and established a career in labor law before leaving to take up the position of dean at Fordham Law.

Throughout Feerick’s career he has served in numerous positions monitoring ethics in the legal profession and government, including as the chair of the New York State Commission on Public Integrity and as the inaugural chair of the ethics committee of the ABA’s Dispute Resolution Section. He has also mediated high-profile labor disputes in the sports world, like the 1993 NFL salary cap dispute and the 1999 NBA lockout. During his military service with the U.S. Army, he served in the 77th Infantry Division and the 4th Judge Advocate General’s Corps.

“Professor Feerick is that rare combination of a lawyer who has had enormous achievement in public service, private practice and in legal education,” said ABA President Linda A. Klein in the press release announcing the ABA Medal. “He is the embodiment of the citizen lawyer. As we celebrate the 50th anniversary of the ratification of the 25th Amendment to the Constitution, Professor Feerick’s contributions to that effort cannot be minimized. Throughout his distinguished career as a labor lawyer, legal educator and public servant, his unimpeachable integrity and brilliance has made him a giant in the legal community and an invaluable aide to our government and our democracy.”

The current dean of Forham Law, Matthew Diller, also commended Feerick for winning the ABA Medal, saying, “John’s professional accomplishments are remarkable—few people have played a major role in building both a major law firm and a major law school—and he has made substantial contributions on multiple fronts to the legal community and beyond.”

Feerick will receive the ABA Medal in a ceremony at the 2017 ABA Annual Meeting on Aug. 12 in New York City. Past recipients of the medal, which has been given since 1929 to lawyers who have “rendered conspicuous service to the cause of American jurisprudence,” include Thurgood Marshall, William J. Brennan, Sandra Day O’Connor, Ruth Bader Ginsburg, Morris Dees, David Boies and Theodore B. Olson.