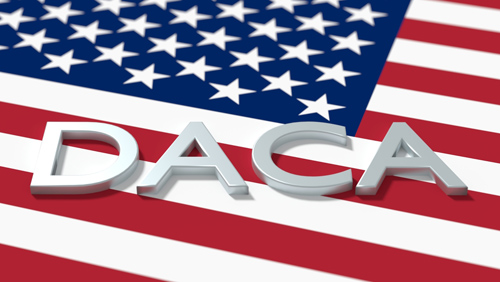 The ABA House of Delegates on Monday passed a resolution urging Congress to put legislation in place allowing Deferred Action for Childhood Arrivals recipients and others to apply for permanent legal status and citizenship.

Beyond DACA recipients, Resolution 108E, passed by the ABA House of Delegates at the midyear meeting in Vancouver, British Columbia, would also want the legislation to help other “undocumented immigrants who entered the United States as children and who meet age, residency, educational and other qualifications (‘DREAMers’) who meet certain educational, work, or military requirements, successfully pass a background check, and remain in good legal standing.”

A second element of the resolution asks that in the absence of swift legislative action by Congress, that the Department of Homeland Security would “exercise its discretion consistent with the legal authority conferred upon it and refrain from apprehending, detaining, or removing DREAMers.”

ABA President Hilarie Bass also took the opportunity earlier in the afternoon during her address to the delegates to lend her support to the protection of DACA recipients.

“Now more than ever, we need to stand up, and we need to speak up,” said Judge Cara Lee Neville, who is retired from the Minnesota Fourth Judicial District. “It’s just the right thing to do.”

Rene Morency, a former delegate of the ABA Law Student Division, urged the delegates not only to pass the resolution, but to return home and be vocal about the need to protect DACA recipients. He named several DREAMers who have joined the legal profession, and his own family members who emigrated from Haiti.

“Share these stories, so that you can undestand what the future of our legal profession looks like,” Morency told the delegates.

The resolution was adopted overwhelmingly, and applause broke out after the voice vote.

Video of debate in the House of Delegates.