Want to help at the border? ABA groups offer avenues to donate time and money 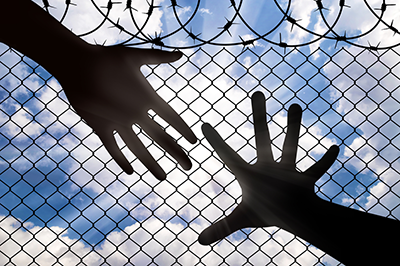 Since the outpouring of public interest in the separation of families at the border, the ABA’s Working Group on Unaccompanied Minors has seen a marked increase in requests to do pro bono work for minor immigrants.

Cheryl Zalenski, director of the ABA Center for Pro Bono, says the working group has gotten more than 50 sign-ups via the ABA Immigrant Child Advocacy Network since June 11, without undertaking any kind of publicity at all.

Though the volunteers were unexpected, they’re very welcome, says Mary Ryan, who co-chairs the working group along with Betty Balli Torres of Texas. Studies show that having a lawyer often makes a difference between success and failure in immigration court—and immigrants are not entitled to public defenders, because being deportable is not a crime.

“We know that children in the court system or in the administrative immigration system have a much lower chance of prevailing, if they have meritorious claims, without a lawyer,” says Ryan, also a partner at Nutter McClennen & Fish in Boston.

The working group and the Immigrant Child Advocacy Network don’t serve immigrant minors directly. Rather, Ryan says it connects volunteer lawyers to local organizations in their areas, to help minors in the later stages of their immigration cases. After being released from federal custody to a relative or adult sponsor, the minors need help with their case to stay in the United States legally—a case in immigration court, an asylum claim or a bid in state court for Special Immigrant Juvenile Status. Volunteers with immigration law expertise or Spanish-language skills are especially needed, but those skills are not required.

Those who would like to work at the border, or volunteer directly through the ABA, can do that through the ABA’s South Texas Pro Bono Asylum Representation Project, which represents both minors and adults, or the Immigration Justice Project of San Diego, which serves only adults. They are funded by the ABA Fund for Justice and Education. Because of the increase in need in recent months, ProBAR is also hiring Spanish-speaking immigration attorneys to work in South Texas.

Those who would like to learn more about immigration law can also get in touch with the Commission on Immigration’s Houston-based Children’s Immigration Law Academy, which offers training, technical assistance and collaboration.

And those who can’t donate time but can offer money are also very welcome. Ryan says donations support the volunteers in large ways and small—training, computers, policy advocacy.

“There’s a crisis in our immigration system right now that’s challenging the ability of any immigrant, but particularly the children, from receiving the due process to which they’re entitled, and to which of course the [ABA] is committed,” Ryan says. “Children going pro se through the immigration system is just not something that any lawyer should let happen.”

ABA President Hilarie Bass traveled to the Texas-Mexico border on Monday and Tuesday “to assess the situation and investigate ways the legal community can help expedite the reunification of families, assist in finding pro bono attorneys for those seeking asylum, and ease the stress and suffering of all individuals seeking entry into the United States.”

• The Immigrant Child Advocacy Network of the Standing Committee on Pro Bono and Public Service, part of the Working Group on Unaccompanied Minors

• ProBAR, part of the Commission on Immigration

• Immigration Justice Project of San Diego, part of the Commission on Immigration

• Donations to ProBAR through the ABA Fund for Justice and Education

To learn more about immigration law:

To work at ProBAR in South Texas:

• Employment at the ABA

Other resources, including statements from the ABA president on the federal treatment of immigrant families:

ABAJournal.com: “34 BigLaw leaders call for an ‘army of lawyers’ to help immigrants and make a pledge”