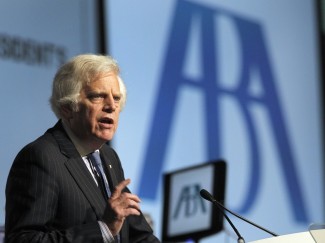 Accepting the presidential gavel today at the gathering of the ABA House of Delegates, new ABA President James Silkenat of New York laid out a series of initiatives he intends to push during his term, which runs through next year’s ABA Annual Meeting in August 2014.

In what may turn out to be Silkenat’s signature project, he discussed the joining of two pressing issues for the legal profession: access to justice and the dearth of jobs for newly minted lawyers.

Silkenat has created the Legal Access Jobs Corps Task Force to look at the problem, particularly reviewing efforts already underway by state and local bar groups and others.

“We must find a way to improve the fit between the needs of our profession and those of society,” Silkenat said.

In another matter, Silkenat noted the $350 million cut to the federal judiciary last year and another 14 percent cut coming in October as part of Congress’s budget sequestration. The result has been extensive layoffs of experienced lawyers, among them public defenders, and difficulty providing representation for poor defendants.

“I think this is a deep embarrassment for a nation grounded on the rule of law,” Silkenat said.

Next:
Lawyer in West Virginia AG's office shoots and wounds himself after standoff with police