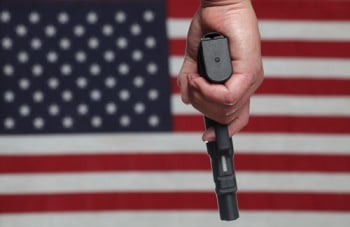 Updated: A measure addressing gun violence won approval from the ABA House of Delegates on Tuesday, despite some opposition by those who raised due process issues.

Resolution 118B urges state and local governments to enact laws and regulations authorizing courts to issue gun violence restraining orders, including ex parte orders that don’t require the presence of the targeted person.

The restraining order should be reported to appropriate state and federal databases so that a person subject to the order is unable to obtain a gun or gun license while the order is in effect, the resolution says.

Estelle Rogers of the Section of Civil Rights and Social Justice spoke in favor of the resolution. “Gun violence restraining orders are a modest common-sense reform to address at least one piece” of the gun violence problem, she said.

The right to keep and bear arms isn’t absolute, Rogers told the House. The Second Amendment protects the rights of law-abiding and responsible citizens, but not those who pose a serious threat to themselves or others, she said.

Also speaking in favor of the resolution was Monte Frank of Newtown, Connecticut, who lives close to the elementary school where 20 children and six school staff members were killed in a mass shooting in 2012.

Connecticut had enacted a gun seizure law in 1999 that was used 762 times to remove guns from potentially violent people from 1999 to 2013. “I wish it had been used in Newtown,” said Frank.

Police found guns in 96 percent of the cases in which they conducted a search under the law, he said. Researchers estimated that for every 10 to 20 gun seizures under the law, one suicide had been averted, according to Frank, a Connecticut Bar Association delegate.

Peter Langrock of Vermont spoke against the resolution. “I’m here because I’m a lawyer and I believe in the Constitution,” he said.

The resolution was approved by a voice vote.

A report to the House of Delegates says incidents of mass shootings have demonstrated the need for gun violence protection orders. “In many of these incidents,” the report says, “community members noted warning signs beforehand, but there was nothing they could do to remove the shooter’s access to guns before the tragedy.”

California, Connecticut, Indiana and Washington have laws providing for gun violence restraining orders, while police in Illinois and Massachusetts can try to remove guns from potentially dangerous people through gun licensing laws.