ABA to Study How Law Firms & Schools Are Ranked 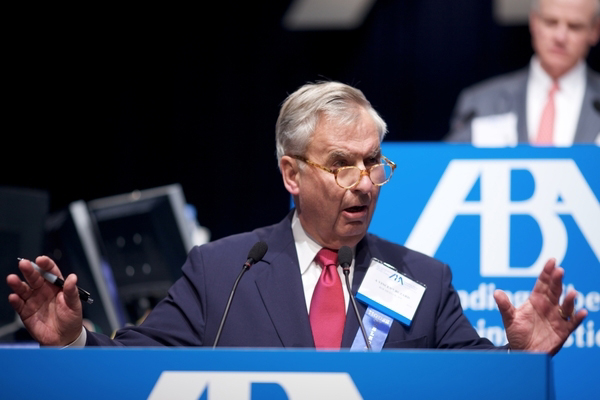 The ABA will study how a variety of organizations rank law firms and law schools. The debate in the ABA’s House of Delegates about the measure proved to be the most contentious of any resolution it considered today.

Resolution 10A, passed by a narrow voice vote, was prompted by a forthcoming ranking of law firms nationwide by U.S. News & World Report magazine, conducted in conjunction with the Best Lawyers survey of law firms. The rankings are expected to be published in October.

The magazine has long ranked law schools, which has rankled many deans nationwide. The ABA Journal reported on the controversy in April 2008.

The wording of the resolution was expanded in the hours before the House met to include law school rankings, and to strike any direct references to US News.

On the House floor, most of the resolution—asking lawyers to consider whether such rankings promote diversity, pro bono activities and other “core values” of the profession—was stripped way by a vote of 203 to 183.

The full resolution as passed reads: “RESOLVED: That the American Bar Association examine any efforts to publish national, state, territorial, and local rankings of law firms and law schools.”

The House narrowly defeated, by a vote of 209 to 190, a motion to indefinitely postpone the measure so that the ABA’s Ethics 20/20 Commission could study lawyer rankings.

In a report accompanying the resolution, the measure’s sponsor—the New York State Bar Association—said “we know, based upon the experience of the U.S. News & World Report’s ranking of law schools, that there will be significant issues regarding the validity of the rankings.”

A federal Government Accounting Office study (PDF) found that US News’ widely-read rankings of law schools are a factor in driving up the cost of legal education, with schools spending more in pursuit of higher rankings, the ABA report said.

The ABA should study whether “law firms will be induced to change their methods of operations and drive up the cost of legal services to the public in the same way that the cost of legal education has been distorted,” the report said.

A survey of clients will be one component of the rankings methodology. Lawyer disclosure of their clients’ names may constitute an ethics violation in some circumstances, the report claimed.

ABA President Carolyn Lamm urged the House to table the measure, saying it may violate existing law, such as the First Amendment and laws against restraint of trade. “If we pass something that is legally incorrect, we will all be exposed. This is a matter for the press, and I’m sure they won’t let it lie if the ABA takes a legally incorrect position,” she said.

“Just because you’re irritated about what some new ratings agency should do, that doesn’t mean we should dash off and take a position,” she added.

But the position of A. Vincent Buzard, a past president of the New York State Bar Association, carried the day. If the ethics commission plans to review rankings, “what’s the harm in passing the resolution? Let’s just get it done.”

Lamm said in an interview after the resolution passed that she would ask the ABA’s Section on Legal Education and Admissions to the Bar to examine law school rankings, and the Ethics 20/20 Commission to review law firm rankings.

Robert Morse, director of data research for U.S. News & World Report, wrote on his blog Morse Code that “both U.S. News and Best Lawyers think that it’s important for the public to have as much information as possible on the relative merits of law schools and law firms.” With the ever-rising cost of a J.D. and tough market for new grads, prospective law students need all of the information they can get, Morse wrote.

Morse said in a 2008 ABA Journal article that, regarding the annual U.S. News law schools feature, he welcomes contact and input from deans. “I want to work with them to improve the rankings.”