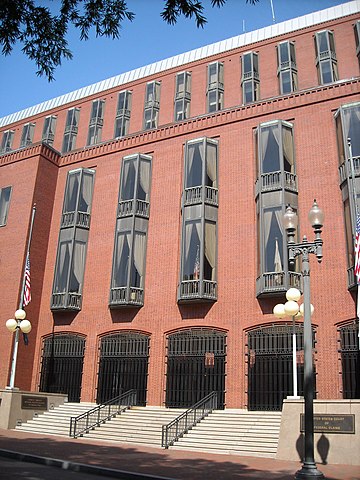 The Howard T. Markey National Courts Building, home of the U.S. Court of Appeals for the Federal Circuit. Photo by AgnosticPreachersKid, via Wikimedia Commons.

The American Bar Association is urging the U.S. Court of Appeals for the Federal Circuit not to include the government’s attorney fees when awarding “all expenses of the proceedings” to the U.S. Patent and Trademark Office.

The ABA filed an amicus brief in NantKwest v. Joseph Matal, urging the full Federal Circuit to overturn a split decision of a three-judge panel.

The panel had ruled that language in a recent revision of patent law permits the PTO to recover not only $33,103.89 in expert fees, but also nearly $80,000 in attorney fees, according to an ABA press release. This is a departure from precedent in patent law, the ABA argues, and would make it difficult for people without deep pockets to seek court review of PTO decisions.

“The ABA submits that imposing governmental attorneys’ fees on patent applicants who choose civil actions under [patent law] will hamper equal access to justice and chill the assertion of meritorious claims,” the brief says. “It is also contrary to the express language of Section 145, which does not overcome the presumption of the American rule that each party pays its own fees.”

NantKwest, a biotechnology company, invoked its right under patent law to appeal a PTO decision to federal district court. Under federal law, this requires it to pay for “all expenses of the proceedings.” For nearly 200 years, the ABA brief says, courts have interpreted this to mean only out-of-pocket costs, such as expert fees or travel expenses. The Virginia district court awarded the PTO only expert fees.

The panel made a “radical, novel” decision, the brief says. Traditionally, U.S. courts use the “American rule,” which says litigants must pay their own attorney fees unless a statute or contract expressly says otherwise. Those provisions are clearer then the patent statute’s call to pay “all expenses all of the proceedings,” the brief says, and they typically reward only the winner of a case. Here, by contrast, the statute applies regardless of who wins. Furthermore, the brief says, the PTO did not start asking for attorney fees until 2013, even though the statute has existed for nearly two centuries.

Furthermore, the brief says, fee-shifting is often used to provide access to the courts. Here, however, the ABA argues that it will achieve the exact opposite, by making it unduly expensive for patent applicants to challenge a PTO decision. Individuals, nonprofits and small businesses would be disproportionately affected by the Federal Circuit’s ruling if it is upheld, the brief says. Congress surely did not intend to create a way to resolve patent disputes that would be unavailable to many applicants, the ABA argues.

“The PTO’s newfound interpretation, if accepted, would have intolerable results,” the brief says. “The doors of justice should be open to all, regardless of individual prosperity.”

The ABA’s position comes from a 2016 resolution before the House of Delegates, Resolution 108A. The resolution addressed this exact topic in reaction to a 4th U.S. Circuit Court of Appeals case, Shammas v. Focarino, which also granted attorney fees. The U.S. Supreme Court declined to review that case.