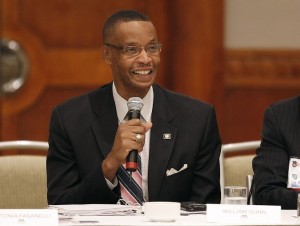 A new initiative to provide pro bono legal assistance to military veterans was announced Saturday by the ABA, the Department of Veterans Affairs and the Legal Services Corp.

The initiative, which will launch as a pilot program in Chicago and St. Petersburg, Fla., will recruit lawyers to help veterans prepare their claims with the VA for disability pay. Currently, many veterans go unrepresented while trying to prepare their claims. Under the program, veterans with claims pending may choose whether to accept pro bono assistance from a lawyer.

“Right now, it’s taking far too long for veterans to get their disability claims resolved, and part of the reason is the length of time it takes to develop claims,” said Will A. Gunn, general counsel to the Department of Veterans Affairs. “We can decide claims much faster when they’re already developed.” The VA has set a goal of eliminating the current backlog of claims for disability pay by 2015.

The ABA is creating the Veterans’ Claims Assistance Network, through which lawyers will receive training and be matched with veterans in need of assistance with their claims. Lawyers at offices that receive federal funding through the LSC also will provide free assistance to veterans with claims. Lawyers can sign up to the network here.

“The ABA is proud to take the lead in connecting veterans with pro bono attorneys who will help them receive the aid our nation owes them for their selfless courage,” said ABA President Laurel G. Bellows in a news release that was issued by the Department of Veterans Affairs. “We hope that our initial focus on Chicago and St. Petersburg can swiftly be expanded across the nation.”

In the same release, Secretary of Veterans Affairs Eric K. Shinseki said it was vital that the VA, ABA and LSC approach the problem as a partnership. “Ending the backlog is an ‘all hands on deck’ effort that requires teamwork, both in and out of government,” Shinseki said. “This partnership between the VA, ABA and LSC is aimed at surging resources to deliver earned benefits to veterans more quickly.”

In an interview with the ABA Journal, Gunn said the ABA is well-positioned to participate in the effort. “The ABA is a tremendous platform and has tremendous reach,” he said. “We’ve been approached by lawyers around the country about how they can help. The ABA is a great way to reach those lawyers.”