ABAnow.org Named a Finalist in the Webby Awards 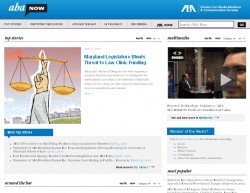 ABAnow.org, the website of the American Bar Association’s Media Relations Department, has been named one of five finalists in the Law category of the 14th annual Webby Awards, a competition described by the New York Times as “the Internet’s highest honor.”

The public can vote to select which of the five will be the People’s Voice winner in the category by visiting this site by April 29. The winner of the public vote, as well as the best site as selected by the contest’s judges, will be given awards at a ceremony in New York on June 14.

The other finalists in the Law category are:

• Bitter Lawyer, which the public selected as the best blog in the Lighter Fare category of last year’s ABA Journal’s Blawg 100.

• Arlington, Va.’s Institute for Justice, which claims to be the nation’s only libertarian public interest law firm. Its founder Chip Mellor was named one of the ABA Journal’s 50 Legal Rebels in 2009.