About 80 people are arrested in third night of St. Louis violence after cop's acquittal 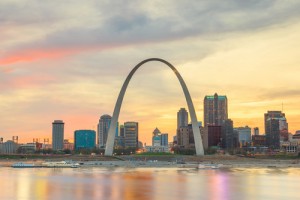 Police arrested about 80 protesters in St. Louis Sunday night during a third night of violence that followed the acquittal of a white police officer in the shooting death of a black driver.

A “group of agitators” didn’t leave after a daytime demonstration ended on Sunday, Mayor Lyda Krewson said at a news conference early Monday. Protesters broke windows and threw chemicals and rocks at police, according to police accounts. The Washington Post, the St. Louis Post-Dispatch and BuzzFeed News are among the publications covering the developments.

Reporters heard police chanting, “Whose streets? Our streets,” after they made arrests. The chant has been used by protesters.

At least a dozen police officers were injured in the weekend protests.

The protests followed the acquittal Friday of former police officer Jason Stockley in the fatal shooting of a black driver in 2011. The Post and the Post-Dispatch covered the verdict here and here. A judge had found the evidence did not support claims that Stockley planted a gun in the car of Anthony Lamar Smith after Stockley fired his gun five times at Smith.

Stockley had said he fired after seeing Smith reach for the gun.

The Marshall Project posted the findings and verdict by Judge Timothy Wilson. The judge said prosecutors failed to disprove that Stockley had acted in self-defense.