After Decades in Practice, Family Lawyer Cringes Over Case 'Way Beyond Just an Ugly Divorce' 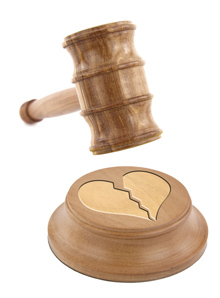 Angry after his wife of 20 years left him, Ronnie Lee Durham, who is now known as Ronnie Lee Johnson, managed to persuade Virginia authorities that she was the abusive one.

Eventually, after she was arrested for the 10th time and spent 17 days in jail, she fled to a women’s shelter in 2008 and hired attorney Robert Zaniel. Now 49 and remarried, Terry Harley cries when she recalls how her lawyer supported her, and himself became a target for Johnson, reports the Washington Post.

A Fairfax Circuit Court judge awarded her $1.35 million for defamation, abuse of process and malicious prosecution in 2010. But the article doesn’t say that she collected.

Meanwhile, Zaniel began hearing from fellow attorneys about seeming Washington Post articles that falsely said he had been arrested. In fact, it was the articles that were false–cut-and-paste jobs that the reporter who was listed as the author had never written. However, they weren’t obviously fakes, and at least one judge, who asked him in open court about his legal troubles, apparently thought it was the real thing, the 59-year-old lawyer tells the newspaper.

Although Zaniel suspected that Johnson was behind the campaign, there was no way to connect him to the fake Post articles–until police searched his home last month and found copies, along with a letter to the League of Women Voters criticizing Zaniel, the Post article says.

Johnson has now been arrested in a felony fraud case, but the charges have nothing to do with treatment of his ex-wife or Zaniel.

Zaniel, who describes his experience representing Harley as “way beyond just an ugly divorce,” recalls cringing whenever he knew he was going to have to deal with Johnson in court.

“Every time in court, he would call me a liar: ‘Mr. Zaniel has a history of lying to the court,’ in front of all my colleagues,” recounts Zaniel, a 34-year practitioner. “I didn’t have anyone in my life that disliked me so much. I’ve never been sued or complained against. It’s been stressful for me.”