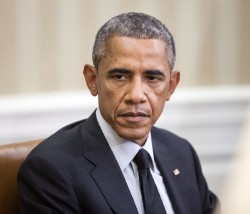 The new firm handling the case is Quinn Emanuel Urquhart & Sullivan, report the New York Times, Politico and the Washington Examiner. The lead lawyer will be William Burck, who is co-head of Quinn Emanuel’s Washington, D.C., office. Anonymous sources told the publications that BakerHostetler’s David Rivkin withdrew from the case amid fears it could drive away some clients.

BakerHostetler was lampooned earlier this month when Jimmy Fallon on the Tonight Show ran a fake commercial for the law firm. “At BakerHostetler, we specialize in one thing: suing the president,” the parody ad said. “For instance, have you ever been forced to pass Obamacare, even though you didn’t like it? We can help you waste thousands of dollars in taxpayer money to fight for what you sort of believe in.” Above the Law linked the video, which you can also see below. The bit about BakerHostetler begins at the 2:43 mark.