After the 'Fight of the Century,' new parties seek to duke it out with Mayweather, Pacquiao in court 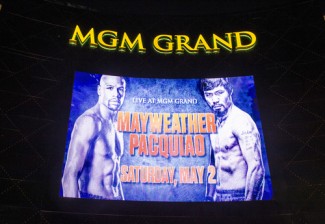 Three days after Floyd Mayweather cruised to victory over Manny Pacquiao in Las Vegas on Saturday in what was billed as the Fight of the Century, new opponents are seeking a share of the all-time-record prize money.

Two fans filed a federal class action lawsuit in Nevada on Tuesday contending that consumer laws were violated and bettors didn’t get fair play because of Pacquiao’s failure to disclose a prior shoulder injury, Reuters reports. The suit seeks damages from the fighter and his promotion company, Top Rank Inc., on behalf of those who purchased tickets, those who watched the fight on pay-per-view television and gamblers who wagered on the result.

Mayweather is also on the defensive: The mother of three of his children filed a defamation suit against him in Los Angeles Superior Court on Tuesday over remarks he made about her in media interviews concerning a 2010 incident at their Las Vegas home.

Mayweather, who wound up with a misdemeanor battery conviction over injuries suffered by Josie Harris, denied in interviews that he physically abused her and suggested he had to “restrain” her because she had been taking drugs, CNN reports. That wasn’t true, Harris said in the suit, which was filed where she now lives. It seeks $20 million. Mayweather could get as much as $200 million from the fight once pay-per-view profits are tallied.

Meanwhile, he apparently has not anted up to cover the $10 million bail in a pending murder case for former rap mogul Marion ‘Suge’ Knight, whose lawyer previously told reporters he expected his client to benefit in this manner from a Mayweather win.

“We’re not going to comment on rumor and speculation,” a spokeswoman for the Los Angeles district attorney’s office told the Los Angeles Times (sub. req.). “We have not been notified by the court of any pending bail hearings.”