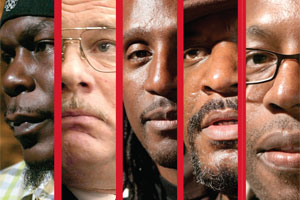 On the morning of July 7, 2009, Marvin Reeves and Ronnie Kitchen stood before a criminal court judge in Chicago and heard the news they had long waited to hear: They were going to be freed from prison after serving 21 years for murders they insisted they never committed.

Both had been arrested by detectives linked to the notorious Chicago police Cmdr. Jon Burge, accused of leading a rogue crew of cops who tortured suspects to extract confessions. In 1988, police claimed that Reeves and Kitchen killed two women and three children and then set fire to the victims’ home to cover up the crime. Juries convicted both men, despite a lack of physical evidence in their respective trials. Kitchen was sentenced to death, Reeves to five life terms.

After revelations surfaced about Burge and his reign of torture, the Illinois Attorney General’s Office re-examined Reeves’ and Kitchen’s cases and found insufficient evidence to prove the pair was responsible for the murders.

As Reeves and Kitchen walked down the steps of the Cook County Criminal Courts building that day as free men, they were swarmed by photographers, reporters shouting questions, well-wishers and loved ones waiting to embrace them. Both men felt overwhelmed.

The exhilaration didn’t last. “After the lights and cameras go off, you’re faced with the reality,” Reeves says now, more than a year after his release. “This is the real world.”

The real world, for Reeves and a growing number of exonerated people, is not always kind. Justice may have been served, but many of the wrongly convicted carry a burden that’s hard to shake. Restoring their names, landing jobs and feeling whole again remain a constant struggle.

Click here to read the rest of “The Real World” in January’s ABA Journal.