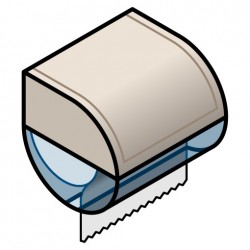 Lawyer Alan Dershowitz is suing TD Garden in Boston for injuries he suffered in a bathroom fall during a Celtics game.

Dershowitz claims in the lawsuit that he was injured nearly three years ago because of a wet floor in the bathroom caused by a depleted supply of paper towels, the Boston Globe reports. “This dangerous condition allowed water from the recently washed hands of each of the myriad bathroom users to drip or be ‘shaken’ onto the floor, negligently creating a hazardous situation for all users,” the suit said.

Dershowitz, an emeritus professor at Harvard Law School, is being represented by a former student, Alex MacDonald.

Dershowitz, 76, says he twisted his right knee and leg in the fall, leading to nearly $6,000 in medical bills. For many months he had to use a knee brace or a crutch, and he is still in physical therapy and still experiences pain that keeps him awake at night, the suit says.

“This is small—for everybody but me,” Dershowitz told the Boston Globe. “When you hurt your knee, you feel it every day.”