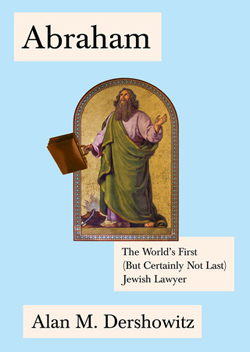 High-profile attorney Alan Dershowitz has written a new book dedicated to the historical legacies of Jewish attorneys. Abraham: The World’s First (But Certainly Not Last) Jewish Lawyer will be released on Oct. 6.

Dershowitz, a Brooklyn native whose parents were Orthodox Jews, told the Wall Street Journal that the biblical figure Abraham inspired his career as a criminal defense lawyer. “Abraham is the only biblical character that starts his career arguing with God,” he said in the interview. “What could be more appropriate for a criminal lawyer? I argue with federal judges all the time who think they’re God.”

He also mentioned the biblical story in which Abraham tells God that he shouldn’t harm the people of Sodom and Gommorrah, because while some wicked people lived there, others were innocent.

“He defended the guilty to make sure the innocent were not prosecuted. Of course, I prefer to represent innocent people,” says Dershowitz, whose clients include Patty Hearst, Mike Tyson and Jim Bakker.

In an excerpt of the book provided to the Wall Street Journal, Dershowitz writes:

“Whether because of our religious training, our history, or other factors, many Jews—it turns out—make darn good lawyers. In every nation in which Jews have had a significant presence, they have been among the leaders of the bar (as well as of other vocations, ranging from medicine to comedy). … We’ve had a lot of practice, as a people, in defending ourselves, but also in defending others. Jews have been at the forefront not only of the commercial bar but also of the human rights, civil rights, and civil liberties movements. We have also been leaders in the continuing effort to promote the rule of law as a universal principle of justice. It all began with the world’s first lawyer, Abraham, whose life, as narrated in the Bible, the Qur’an, and the commentaries, I now recount.”