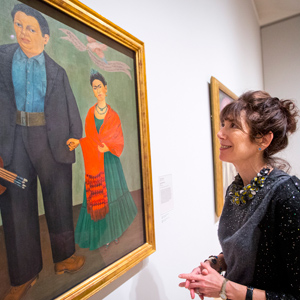 Alexandra Darraby really wanted to get to the Rothko. So did I, but we each had our own reasons for making the pilgrimage to the gallery at the San Francisco Museum of Modern Art where one of the major works of American artist Mark Rothko was on display.

For Darraby, Rothko epitomizes the stark power of contemporary (meaning works by living or recently deceased artists) and modern (going back to the early 20th century) art. And I wanted to see a work by the artist who first opened my eyes to the challenges and rewards of modern and contemporary art.

Fortunately, Rothko’s No. 14, painted in 1960 (he died in 1970) was one of the works available for viewing in the limited number of galleries that were open to visitors during the ABA President’s Reception held Saturday evening at the newly renovated and expanded Museum of Modern Art—affectionately known to San Francisco residents as SFMOMA.

But given my uncertain familiarity with modern and contemporary art, I decided it would be instructive to tour the open galleries, which contained an impressive if limited portion of the museum’s collection, with an ABA member whose knowledge of art would help me appreciate what we were viewing.

Darraby turned out to be an ideal companion for such a task. She is one of those fortunate lawyers who has been able to blend her personal passion with her professional practice. She comes from a family of amateur artists, and art in all its forms is an integral part of her life. She has studied art, taught art law at Pepperdine University School of Law in Malibu and owned her own gallery for several years. In the early years of the Obama administration, Darraby served as an art expert in Russia for the U.S. Department of State.

Darraby is the founder and principal of The Art Law Firm in Los Angeles, which handles virtually every kind of matter that involves painting, sculpture, architecture and design, museums, even antiquities issues. In the ABA, Darraby is a member of the governing committee for the Forum on the Entertainment and Sports Industries, and she’s a past chair of the forum’s division on arts and museums. She is also the author of the 2014 edition of Art, Artifact, Architecture and Museum Law, published by Thomson Reuters. 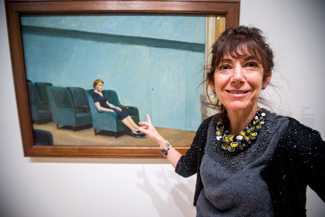 “I’m a great art lawyer because I’m a 24-7 art person,” said Darraby as we shared a plate of sushi at the President’s Reception. “It’s a perfect blend. I get to think and talk about art all day.”

Then, joined by Tony Avelar, a local freelance photographer shooting the Annual Meeting for the ABA Journal, we set out in search of Rothko’s No. 14.

The “new” SFMOMA is something of a work of art itself. The museum reopened in May after closing in 2013 for the renovation, and the new facility is immaculate and attractive, full of light and space that gives the collection’s paintings, sculptures, photographs and other works room to breathe. What a media packet describes as the “transformed” museum has been expanded from 70,000 square feet of exhibit space to 170,000, allowing many more works to be displayed, including 260 works from the Doris and Donald Fisher Collection of contemporary art based in San Francisco. The renovated museum was designed by Snøhetta, a firm based in Oslo, Norway, which now also has studios in San Francisco and other cities. 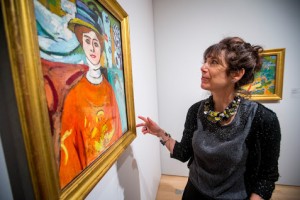 “I don’t get a revelation about her personality,” Darraby said about La fille aux yeux verts (The Girl with Green Eyes) by Henri Matisse. Photo by Tony Avelar.

Darraby warmed up her powers of art analysis with a 1908 work by Henri Matisse, titled La fille aux yeux verts (The Girl with Green Eyes), which applied a style that bordered between post-Impressionist representational art and the abstract. The work combined a bold use of colors and shapes to depict a young woman. “But I don’t get a revelation about her personality,” Darraby said.

The next work along the way was a painting by Mexican artist Frida Kahlo, titled Frida and Diego Rivera, which, like the Matisse, made dramatic use of color, especially the artist’s red blouse and green shawl.

Finally, a couple of galleries away, we came upon the Rothko, which was a drastic departure from the works by Matisse and Kahlo. Like all of Rothko’s major works, No. 14 throbbed with enigmatic energy stemming from its use of strong, if not necessarily bright colors, presented in simple but compelling blocks.

“I love Rothko,” Darraby said as we entered the gallery. “The installation is appropriate because it shows the work alone on the wall.”

Darraby recounted her visit several years ago to the Menil Collection in Houston, which has an entire section devoted to works by Rothko. “It was the most compelling and moving and contemplative effect I’ve ever experienced, like I was in a place of worship,” she said. “Any artist who can accomplish that has done something special. It’s almost Zen.”

And I told her about how a viewing of a Rothko painting triggered my appreciation for modern and contemporary art. “It’s fascinating,” Darraby said, “that we come from different backgrounds and yet we’re both drawn to the Rothko.”

And yet, she said, “I don’t think he was painting for us, but for himself and some higher meaning.” Rothko’s work “doesn’t have any of the high-tech or special effects or other trappings, yet it changes the atmosphere of the whole room.” 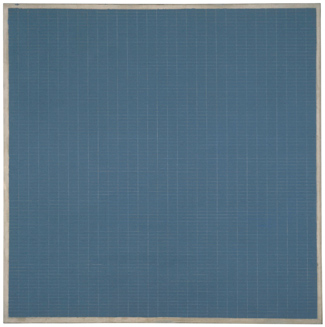 Darraby was disappointed that we couldn’t visit the SFMOMA’s Agnes Martin gallery. She compares Martin’s work favorably to Rothko. Martin’s work isn’t “just about colors and patterns, but an illuminating force you don’t expect from pastels,” tones that Martin uses extensively. “For me, there’s a spirituality to Rothko, and a spirituality to Agnes Martin. I don’t know if the artist intended that, but it doesn’t matter.”

So Darraby consoled herself with a viewing of Edward Hopper’s Intermission, which depicts a woman sitting alone in a theater. She observed that many people find it easier to relate to figurative works because they depict things we recognize. And yet Hopper includes elements of abstraction in many of his works, and he often leaves the viewer wondering about the stories of the people in his works. Intermission, she said “is very enigmatic, like all his work. You bring your own story to it.”

Darraby said legal issues relating to art are becoming more complex as the value of art, including contemporary works, continues to climb. “The front pages of every medium has art stories almost every day,” she said, “and it’s because there’s so much money in art now.” Increasingly, some people are buying art primarily as investments, not to display, she said.

For herself, Darraby follows simple rules in collecting art. “I buy what I like,” she said. “I don’t buy what people tell me to buy. And the art has to speak to me, and it has to hold the wall.” 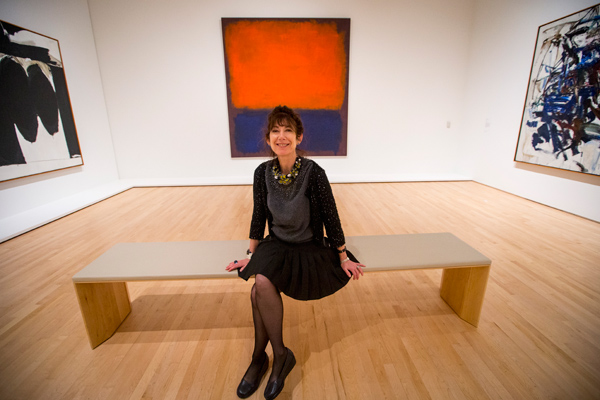