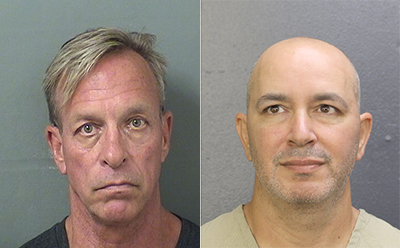 The four alleged owners and operators of Mugshots.com have been arrested and are pending extradition to California.

“This pay-for-removal scheme attempts to profit off of someone else’s humiliation,” said Attorney General Xavier Becerra in a statement. “Those who can’t afford to pay into this scheme to have their information removed pay the price when they look for a job, housing, or try to build relationships with others. This is exploitation, plain and simple.”

Sahar Sarid and Thomas Keesee were arrested in South Florida on Thursday, Ars Technica reported. Kishore Vidya Bhavnanie was arraigned Wednesday in Pennsylvania, while David Usdan was taken into custody in Connecticut. Bail was requested at $150,000 for Usdan and $1.86 million each for the other defendants.

Mugshots.com and other similarly situated websites operate a “depublishing” scheme where they collect public mugshot and arrest records and publish them to their site. When someone asks for the photo to be taken down, the website demands a fee be paid. For many, paying one site leads to the mugshot appearing on a different website, according to the affidavit filed May 10.

The California Attorney General’s Office said in its release that over a three-year period, the defendants collected more than $64,000 in removal fees from approximately 175 individuals with California billing addresses; and during the same period collected more than $2 million in removal fees from approximately 5,703 individuals.

Sarid wrote on his website May 15 that his time working with Mugshots.com ended in 2013. However, in a motion to dismiss a civil case filed in Illinois in 2016 Sarid did not challenge the assertion that he was the owner of Mugshots.com, according to Ars Technica.

The website says that Sarid lives in Thailand and has never been paid by Mugshots.com. The affidavit alleges that Sarid’s sister, Shunit Sarid, mother, Aliza Sarid, and his business partner, Thomas Keesee, all tie him to a bank account associated with Mugshots.com that brought in an average of more than $27,000 a month.

At the time of publication, the Mugshots.com was still operating and continues to name people arrested in California.

An estimated 70 million Americans have a criminal record.

The individual struggle against these websites is well-documented, affecting employment, housing and potential relationships. Seventy-seven percent of employers Google and otherwise research job applicants, according to the job-posting website Monster.com. And it is an unanswered question as to whether turning down tenants based on their criminal records violates the Fair Housing Act. Google attempted to ameliorate the problem by deindexing mugshot websites from their search results in 2013 with limited results.

Earlier this year, the ABA Journal spoke with Julie Cantu, a Florida resident, who found her mugshot from a DUI arrest on Mugshots.com and other similar sites.

The whole experience left Cantu feeling paranoid. She says she worried that the photo was “going to be there the rest of my life.”

In the affidavit filed May 10, numerous personal stories like Cantu’s were shared by those who were arrested without charge, had convictions overturned or had served their time and attempted to have their information removed from the site through payments of usually $399 or by simply requesting they be removed.

In one example, Jesse T. (his last name is withheld in the filing) was arrested without charge in 2013. He spent one night detained in Sonoma County jail. Afterward, he applied to 100 jobs in the construction and labor fields and never received a single response. A year later, a friend pointed him to Mugshots.com, where he saw his mugshot and personal information posted.

He called the website’s 1-800 number and asked for the information to be taken down. When the man on the line told him it would cost $399 to take the photo down, Jesse T. informed the person that was illegal. The man laughed in response and hung up the phone.

Jesse T.’s back-and-forth with Mugshots.com went on for at least another two years without resolution, which he says left him humiliated and with a ruined reputation.

States, including California, have attempted to rein in these websites with dubious impact. According to the PEW Charitable Trusts, 18 states have passed laws to restrict mugshot websites. California passed a ban on charging money to take down photos in 2014. Others limited private=sector access to mugshots and require that mugshot sites are accurate and reflect official records.

However, when people take steps to expunge their criminal records, the websites have no interest in reflecting the updated and accurate records. As Mugshots.com states on its website: “As you may be aware, expungement and pardon only apply to certain government agencies’ databases, and not all of them. Certainly not to the private sector.”

Because of the industry’s response and lackluster action taken by law enforcement up until now, PEW points out that the success of these laws has been limited.