Am Law 100 rankings show growth, as well as growing divide between megafirms and large firms 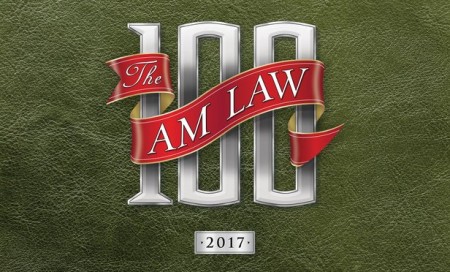 Am Law 100 firms had a good 2016, but there are some potentially troublesome signs on the horizon.

The official Am Law 100 annual rankings were unveiled Thursday by The American Lawyer. According to the publication, the Am Law 100 grew revenue by 4.3 percent in 2016, which was a better showing than last year, when gross revenue ticked up 2.7 percent from the previous year. Meanwhile, profits per equity partner increased by 3 percent, a slight decrease from last year’s 3.9 percent increase.

However, the statistics also showed a growing divide between the top 50 highest-grossing firms and the remainder. Firms in the top half of the Am Law 100 saw profits-per-equity-partner increase 6.1 percent, while those in the second half saw the same metric decrease by 1.7 percent.

“As clients continue to give more legal work to in-house legal teams and other legal service providers, and the gap in revenue at different ends of the Am Law 100 deepens, those in the second half of the ranking find themselves at a crossroads,” said Gina Passarella, Executive Editor of The American Lawyer, in a press release. “If they want to grow revenue and remain profitable in today’s highly volatile and uncertain industry, they may have to change course. That could mean focusing on the core practice areas that differentiate them, and altering their staffing and compensation models so their firms can efficiently operate at optimal capacity.”

The American Lawyer also found that revenue-per-lawyer among Am Law 100 firms was sluggish in 2016, increasing by less than 2 percent – the second-lowest increase since 2011. The slow growth could mean trouble for BigLaw, although some consultants told The American Lawyer that it could have also been caused by a rare post-recession uptick in law firm hiring. The total number of lawyers in the Am Law 100 increased 2.7 percent in 2016 – a big jump when compared to previous years, when growth of less than 1 percent was typical.