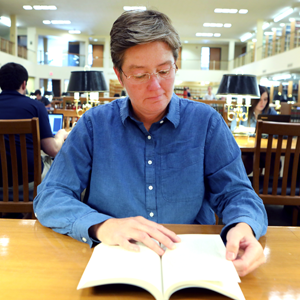 Rebecca Sandefur is one of 25 MacArthur fellows chosen for 2018. (Photos courtesy of the MacArthur Foundation.)

American Bar Foundation faculty fellow Rebecca Sandefur has been awarded a MacArthur Fellowship for 2018 for her work "promoting a new, evidence-based approach to increasing access to civil justice for low-income communities."

The MacArthur Foundation announced Thursday that Sandefur is part of the class of 25 fellows being awarded “genius grants,” giving them $625,000 over five years to pursue their work, with no restrictions or requirements attached. The Chicago Tribune also has a story.

Sandefur researches access to civil justice—how low-income people think about, get and use legal services for non-criminal problems. She founded and leads the ABF’s access to justice research initiative. The ABF is a nonprofit research institute primarily funded by the American Bar Endowment, the charitable affiliate of the ABA.

Sandefur says hundreds of millions of Americans have access-to-civil-justice problems, which can impact their ability to get and maintain stable housing, employment, healthcare and custody of their children. In 2014, she presented a report on some of her findings at the ABA Annual Meeting.

“So this is a big problem, and $625,000 cannot solve a problem on that scale,” she says. “I’m working on finding some way to use this as seed money… that would tackle this big problem.” 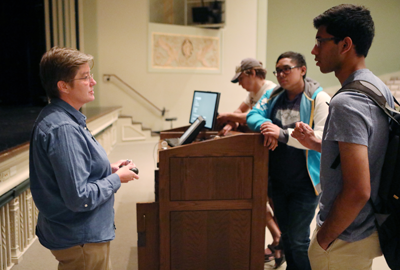 Rebecca Sandefur (left) speaks with students in Lincoln Hall at the University of Illinois at Urbana-Champaign.

In addition to her affiliation with the ABF, Sandefur is a sociology and law professor at the University of Illinois at Urbana-Champaign. Her research focuses on inequality and the law, particularly access to justice for civil legal matters. According to her biographies with the ABF and the University of Illinois, she’s currently working on a study of ordinary people’s legal problems and the resources they have available to handle those problems. She’s also part of ABF’s longterm After the JD study on lawyers’ career paths, looking at how lawyers in public-sector or public interest jobs manage their law school debt.

Sandefur’s MacArthur biography adds that she’s concluded that ability to navigate the legal system is the chief advantage of hiring a lawyer. Therefore, she believes it’s possible to close the “justice gap”—the inability of lower-income people to afford a lawyer—without lawyers. She’s advising pilot projects in two states that use nonlawyers to guide litigants through civil matters.

“The only way we can respond to a crisis on this scale is by working across different lines of service providers.. to devise solutions that meet people where they are,” she says.

“We congratulate Becky on this wonderful and well-deserved honor,” Executive Director Ajay Mehrotra of the ABF said in a press release. “We look forward to her continued significant contributions to the field of access to justice research that will promote a more just society.”

Other 2018 MacArthur fellows who work in the legal sphere include:

• Becca Heller, executive director and co-founder of the International Refugee Assistance Project. With IRAP, Heller helps bring law students and law firms together with refugees who need help with the complex process of applying for refugee resettlement in the United States and abroad. IRAP has taken an active role in refugee rights litigation, and was among the leaders that mobilized lawyers to airports after President Donald Trump signed his executive order forbidding travelers from Muslim-majority countries from entering the United States. Earlier, IRAP sued the government on behalf of Iraqi and Afghan translators who worked with U.S. troops at great personal risk, but couldn’t get into the United States.

• Raj Jayadev, executive director and co-founder of Silicon Valley De-Bug, a Bay Area activist group that works on criminal justice reform issues. His MacArthur biography says his most notable project is the Albert Cobarrubias Justice Project, which brings together whole communities to help families navigate the criminal justice system and assist the public defender assigned to the case. “Participatory defense” permits community members to help gather and review evidence and paint a sympathetic picture of the defendant, resulting in fewer plea bargains. The model is in use in at least three other states, and Silicon Valley De-Bug is expanding its work into policy advocacy.