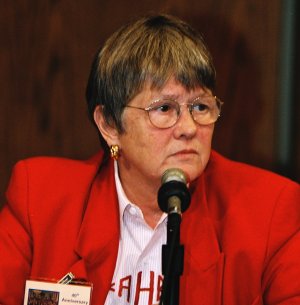 A woman who took her gender stereotyping case to the U.S. Supreme Court after twice being denied a partnership at Price Waterhouse has died at 74.

Ann Hopkins died June 23 from acute peripheral sensory neuropathy, the New York Times reports. The Supreme Court ruled in her landmark case, Price Waterhouse v. Hopkins, that the ban on sex discrimination in Title VII of the Civil Rights Act includes discrimination against those who don’t conform to gender norms.

Hopkins had the most billable hours among her colleagues when Price Waterhouse first denied her a partnership in 1982. Leaders at the accounting firm had complained that she was macho, difficult and aggressive, and she should dress more femininely and wear makeup, the Times wrote. She also failed to obtain partnership the following year.

After winning her case at the Supreme Court, Hopkins persuaded a lower court in 1990 that Price Waterhouse had discriminated against her. She was awarded $370,000 in back wages and allowed to become a partner. Hopkins took the position and worked at Price Waterhouse until she retired in 2002, according to the Times obituary.

Hopkins told the Boston Globe in 1990 she isn’t a heroine. “The only thing that makes me remarkable is that I happened to stand up for a particular principle at a particular time,” she said.

Hopkins’ daughter, Tela Gallagher Mathias, told the Times that her mother could be described as “a reluctant civil rights landmark, a Texan, a constant gardener and an excellent baker of pies.” Though she didn’t like pie, Mathias would bake them to show love, Mathias said.

Her mother could be prickly but she also believed in diversity, Mathias told the Times. “You either loved her fiercely or you couldn’t stand being in the same room with her,” she said.