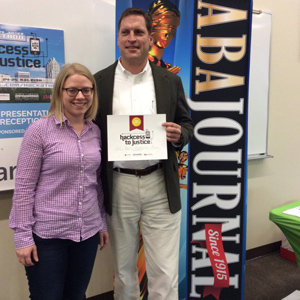 The hackathon was kicked off by Duke University law professor Jeff Ward, who runs the law school’s Start-Up Ventures Clinic. He spoke passionately about the financial plight of many North Carolina residents and the need to make legal aid more accessible. “The access-to-justice gap is profound,” he said.

North Carolina Supreme Court Justice Barbara Jackson, who also helped judge the competition, spoke at the end of the hackathon. She noted the rising numbers of North Carolina residents in need of legal aid and the decreasing dollars available to service them. She said the state supreme court had set up several committees to tackle access-to-justice issues through a multidisciplinary approach including technology.

DiMaio, the co-creator of the winning app, is a legal aid attorney in Raleigh who works primarily with migrant farm workers. She said the idea for her winning app grew out that work. Many migrant farm workers would call for help or to report complaints, but could not tell her or her colleagues in what city or county—sometimes even what state—where they were working. She recalled driving around a North Carolina town with one client trying to spot a familiar landmark so she could file a complaint on his behalf with the appropriate authorities.

With the N.C. Farmworkers’ App, migrant and seasonal farmworkers can find out what their legal rights are; collect evidence such as audio recordings or GPS coordinates of a field; and submit Occupational Safety and Health Administration complaints to the Legal Aid of N.C. with an email or voice mail. The app is available in English and in Spanish.

DiMaio said a surprising number of migrant farm workers have smartphones. She hopes her app will help them report problems and get help more easily. 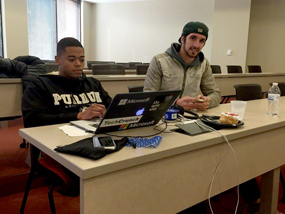 Christopher Price (left) and Cody Meshberger worked through the night on their Fast Track app. (Photo from the North Carolina Bar Association.)

Taking second place at the hackathon was Fast Track, a multi-function smartphone app designed to help legal aid lawyers and their clients use their resources more efficiently. The app has a variety of features, including information on expungements in North Carolina; a search system filtered to only present results from .org and .edu sites; and additional information for legal clients, such as resources on disability law. Coders Christopher Price and Cody Meshberger worked all through the night on the app to collect the $1,000 second prize.

The $500 third place prize went to Michael Silverman, a developer. His submission of a Legal Aid eligibility test is intended to provide a simple, easy to use, mobile friendly interface that allows individuals to learn if they are eligible for legal aid by answering a few questions. Silverman plans to continue to work on the app to be accessible through voice prompts which will be translatable to different languages.

To see all the winning submissions, follow this link.