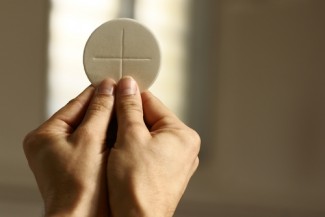 Updated: A Roman Catholic archbishop in Oklahoma City is dropping a lawsuit he filed against a satanist group contending it was in unauthorized possession of a consecrated Eucharistic host. The group had planned to use the blessed bread wafer in a “black Mass” scheduled for next month.

Adam Daniels, who is head of the Dakhma of Angra Mainyu Syndicate, told the Wall Street Journal Law Blog on Thursday that he would return the wafer if Archbishop Paul Coakley would drop the lawsuit. “Once the Catholic Church has dropped the lawsuit, they can collect it from my attorney,” he said. “I don’t feel like wasting thousands of dollars fighting over a cookie.”

Michael W. Caspino, the lawyer for Coakley later confirmed to Law Blog that a priest collected the wafer from a representative of the satanist group. Caspino called the development a ”gigantic victory for decency and for all religions.”

Coakley had sought a court order requiring the to return the wafer to the church, as well as attorney fees and costs. The Associated Press, Courthouse News and the Oklahoman had stories.

The Oklahoma County District Court action accused the satanist group of having improperly obtained possession of the host through means such as “theft, fraud, wrongful taking or other form of misappropriation, either by defendants or by someone else.”

Daniels, had been named as a defendant in the suit along with the group, denied that allegation. He told the Oklahoman he was mailed the consecrated host by a Catholic priest in Turkey who subsequently was killed because of his satanic beliefs. Daniels said the archbishop has no proof he did anything wrong, let alone stole the host, and initially called the suit at effort at intimidation intended to prevent his group from conducting the scheduled event for which it has rented space in a civic center basement theater.

The case had been assigned to Judge Bryan C. Dixon, who had ordered the defendants to preserve the host until the litigation concluded.

Updated Aug. 22 to report that the lawsuit is being dropped.