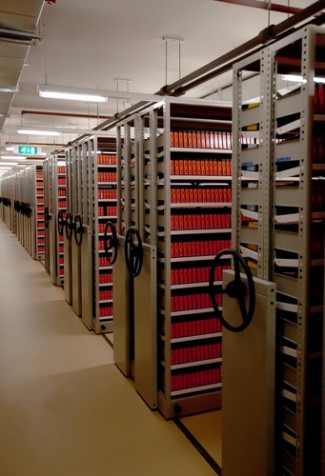 As governments tighten budgets, archivists are being forced to cut back on staff and conservation activities, threatening historical documents and records throughout the country.

This is particularly true in Georgia where the Georgia Archives may soon be impossible to visit, making it the first state without archives open regularly to the public, the New York Times reports.

With budget cuts, the Georgia Archives will see its staff dwindle to three, including a maintenance man. The result, the Times notes, will likely be a stockpile of documents without anyone left to sort them.

The Times reports the Georgia Archives as only the most extreme example of a national problem as budget cuts and technological advances are transforming how public records are collected and maintained. While most new information is digitized, there are no guarantees that these digital records will be accessible in years to come. And most governments haven’t yet decided at what point many electronic documents, including birth certificates, are considered acceptable for legal proceedings.

“A lot of this is untested in court,” Sarah Koonts, the director of archives and records in North Carolina, tells the Times. She wonders, “What kind of metadata do we need to have around an electronic record to prove it’s authentic?”

Richard Pearce-Moses, director of the archival studies program at Clayton State University, tells the Times that, “archives are like an insurance policy,” especially when it comes to resolving disputes.

“There is a good chance we might never need to know where the county line is, but when we do, we really, really need to know,” he is quoted saying.

For now, archivists are deciding what to keep and throw away or sending information directly to repositories. “What it really boils down to right now is triage,” Pearce-Moses says.