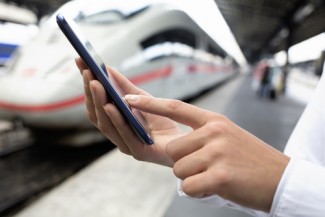 Cellphones and their video capabilities are a boon to police seeking evidence to solve crimes, but they have also left people more oblivious to crime occurring in their midst.

An example played out late last month, when a man on a crowded commuter train in San Francisco displayed a gun several times and no one noticed, the San Francisco Chronicle reports. Passengers engrossed in their smart phones and tablets didn’t look up until the gunman pulled the trigger. A San Francisco State student, Justin Valdez, was killed.

Police believe Nikhom Thephakaysone, 30, shot the student because he was hunting for a stranger to kill, the story says. The suspect’s display of the gun—and the failure of anyone to react—was captured on the train’s camera.

District Attorney George Gascon says the episode shows the problems of distraction in a digital age. “These weren’t concealed movements—the gun is very clear,” he told the Chronicle. “These people are in very close proximity with him, and nobody sees this. They’re just so engrossed, texting and reading and whatnot. They’re completely oblivious of their surroundings.”