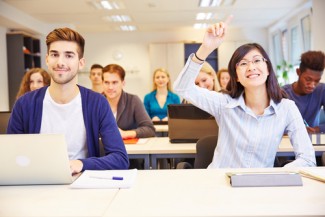 Law school enrollment could jump 5.5 percent this year, according to a law professor’s analysis of applications so far.

Jerry Organ, a law professor at the University of St. Thomas School of Law in Minneapolis, estimates that 57,500 people will apply to ABA-accredited law schools this admissions cycle, the National Law Journal (sub. req.) reports. That would be the first increase in applicants since 2010. His analysis is posted at the Legal Whiteboard.

Organ also found an increase in the number of applicants with Law School Admission Test scores of at least 165. As of April 15, about 500 more test-takers had those scores compared to the number a year ago. In addition, there were 300 more test takers with LSAT scores of 160 to 164.

“The good news,” Organ told the National Law Journal, “is that the [applicant] pool is larger and stronger.”

Organ believes the increase in applications could result in law schools enrolling 2,100 more students this fall. That could lead to an increase in the first-year entering class of about 5.6 percent over last year.