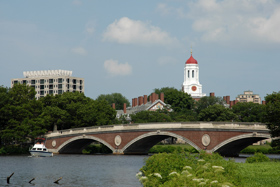 High school sweethearts Ron and Sarah Gonski made a pact: They’d study for the LSAT together, apply to law schools across the country and choose the one that accepted them both.

Now this fall, the couple will start classes at Harvard, their first choice.

The Gonskis’ path to law school began in 2007 when the two University of Maryland grads realized they weren’t satisfied with their current jobs, according to a story in the Arizona Republic.

Ron had been working as an electrical engineer and Sarah in marketing at a software firm when the two spent a summer in Burundi working for a community development organization. There they noticed that many people they worked with had law backgrounds.

“It seemed like a law degree was either a prerequisite or would open a lot of doors,” Ron Gonski is quoted saying.

Before making the decision to pursue law school, the two taught English in public schools in Spain.

The Republic notes that of the 6,364 students who applied to Harvard Law for the class of 2014, 13 percent were admitted.