Corrected: Plans for a new $129 million law school complex to be constructed by Arizona State University on a city block in downtown Phoenix include not only the Sandra Day O’Connor College of Law, which presently operates in Tempe, but a public law library, a civic center and what is billed as the largest university-based nonprofit law firm in the U.S.

Unveiled Wednesday on the drawing board, the six-story, 260,000-square-foot complex is expected to be in place by 2016, according to KTAR and the Republic. Final approval is still needed from ASU’s board of regents, but is expected to be forthcoming. 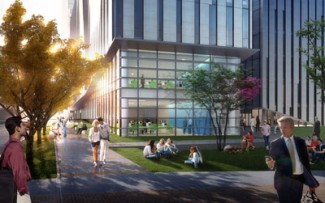 An artist’s rendering of the law school. Photo courtesy of the city of Phoenix.

“This is more than just a move to a new building,” said ASU President Michael Crow. “It is a major part of our city and state’s future. What we now know that we didn’t know a few years ago is that not only is the downtown Phoenix campus successful, it’s wildly successful.”

“What we will see is a law school that is unprecedented in their engagement in the city,” said Phoenix Mayor Greg Stanton. Seeing its future enhanced by the presence of young professionals, the city has provided millions of dollars in financing for the project.

The ASU Alumni Law Group will hire up to 30 recent graduates of the law school to hone their practice skills while providing legal work, under the supervision of five experienced attorneys, to area residents at affordable rates, law school officials say. They expect the nonprofit law firm to be a legal equivalent of a teaching hospital at which young doctors are trained.

While the new building will take up most of a city block, a portion will be left open for potential future expansion. It might also be used for residential construction, officials say. Two levels of underground parking are included in the plans.

Press releases from the law school and city of Phoenix provide further details.

ABA Journal: “Incoming ABA President James Silkenat puts a job corps for new lawyers at the top of his agenda”