How to be a boss | More hot coffee lawsuits on horizon?

When you’re in charge

“How do you be a boss—if you’ve never been a boss before?” A reader who had been promoted in the last year wanted to know what Corporette’s Kat Griffin thought. The onetime practicing lawyer drew on her own experience.

Griffin recalls finding making the transition to managing people difficult as well. “My ‘big sister’ instincts kicked in and I basically tried to protect the subordinates,” she wrote. “I tried to make sure that they didn’t turn in work that made them look bad. I tried to give them super advance warning of projects and deadlines, since I had always hated when people dumped projects on me at the end of the day. If my boss had harsh criticism for the subordinate I tried to filter that and spin it so my subordinate got the constructive criticism minus the stabby feeling.”

In hindsight, though she thinks she may have coddled her subordinates too much. “The truth is I spent a lot of time that couldn’t necessarily be billed.”

She lists five tips she would have given herself. Among them? Be clear on the work product you want before you assign it. Also, protect your earned respect by putting a physical distance between your personal life and the office. “For example: in my dating days I never brought my suitors near the office,” Griffin wrote. “Don’t go drinking with friends near the office and talk loudly about your job. You may even want to consider salons near the office to be off-limits—the last thing you want is to give someone a huge project and then be seen getting a mani/pedi near work.”

Could it cause a latte trouble? 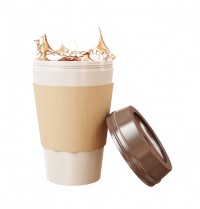 “The environmental impact of a switch away from polystyrene cannot be understated,” Farr wrote. “Given the billions of cups of coffee sold by McDonald’s, the impact is significant.”

But Farr predicts that the changed makeup of the coffee cups will be brought up in a future lawsuit. “Inevitably, someone will spill coffee from one of the new cups onto himself and claim that the spill would not have occurred but for the double-walled paper construction,” he wrote. “While we have no idea whether there is a financial difference between paper and polystyrene, we wouldn’t be surprised to see an argument in the future that McDonald’s is sacrificing consumer safety in favor of increased profit margins.”

Updated Oct. 8 with an update from LexisNexis.