“Our clients in the legal services industry are moving away from ad hoc marketing investments and moving toward sustainable relationship marketing strategies that will help them better achieve their overall business goals,” ALM senior vice president Kevin Vermeulen said in the release. “The ability to deliver end-to-end marketing campaigns that are created with clients across all stages of the marketing process—from planning to execution to post-campaign follow-up—is the future of our industry.”

LexBlog’s Kevin O’Keefe writes at Real Lawyers Have Blogs that he also thinks firms are moving toward relationship marketing and away from ad hoc marketing. “To the extent that ALM can leverage its experience in publishing and event management to help law firms build and nurture relationships, not just with clients, but with influencers and amplifiers, ALM’s service will be of real value to law firms.”

But at Simple Justice, New York City solo practitioner Scott Greenfield wonders how this move might affect the content of ALM’s publications.

“Does this mean that Legal Blog Watch will now be an integral part of ALM’s lead generator?” Greenfield wrote. “Bruce Carton probably gets a bunch of press releases and tips every day from people who want him to take notice of their incredibly important bloggy news, and promote the living crap out of them. While I can’t imagine Bruce selling his keyboard, I can easily imagine his handing off the reins to another who might be more amendable to the corporate good.”

At the Careerist this week, Vivia Chen interviewed University of California Hastings College of the Law dean Frank Wu about his recent decision to cut his school’s enrollment by 20 percent over the next three years.

Naturally, he didn’t cut enrollment because he didn’t think the spots could be filled. “It’s that society and students would be angry with me if we did,” Wu told Chen. “We can fill the class, but it would be irresponsible. It’s like the housing market: People shouldn’t take a subprime debt on a house just because it’s available. Nor should people buy into an education that’s too big and expensive for them.”

The fact that his school is independently governed rather than beholden to higher-ups within a particular university made it possible for him to make such a radical decision. And it was a hard one. “No CEO reduces revenue by $9 million a year,” Wu told Chen. “Do the math: 240 students times $46,500 in tuition. Now subtract out financial aid and multiply three-quarters of the [total] tuition by 240, and you get a big, big number.”

Wu asserts, though that this decision was not a reaction to the current job market. “It is forward-looking. We spent a year studying this. I’ve been at this since it started. It’s part of a larger effort to reboot legal education. My view is that the marketplace is rapidly changing, and that pedagogy is going online and taking an interdisciplinary approach. I’m betting my career on this.”

This week, the now eponymous blog of former sex crimes prosecutor and novelist Allison Leotta, largely dedicated to critiquing each episode of Law & Order: Special Victims Unit on the basis of what the show got right and wrong from a legal perspective, singles out 10 lifesaving lessons one could learn from the show. Below we share three of them.

1. You may already be in love with your rapist. “When we think of rape, we tend to picture a stranger lurking in the bushes,” Leotta wrote. ” But most sexual assaults I saw as a prosecutor were committed by a man the victim knew intimately: an ex-boyfriend or stepfather; a doctor or minister; a teacher or coach; a professional colleague or the guy brought home from a bar.” The rape victim in the “Blood Brothers” episode—which was a twist on Arnold Schwarzenegger’s real-life love child scandal (a plotline that Leotta could see coming)—the 13-year-old pregnant victim wouldn’t name her wealthy attacker because she hoped he would marry her.

3. If you are sexually assaulted, tell the police the truth. Immediately. In the season premiere, a take on the on the Dominique-Strauss Kahn case, a hotel maid who alleged she was sexually assaulted by a powerful Italian politician saw her case fall apart after inconsistencies surfaced in her story to police. “In real life, it’s nearly impossible to prosecute a he-said/she-said sex assault when the victim has made seriously conflicting statements,” Leotta wrote. “If you’re worried about telling the police something, it’s better to get it out up front.”

5. There is no florist-client privilege. A florist in the “Blood Brothers” episode tried (and failed) to argue that his delivery of roses was confidential. “Frequent TV mentions of the attorney-client and doctor-patient privileges have made viewers believe in other privileges that don’t actually exist,” Leotta wrote. “I’ve had people argue that information they told their hotel concierge, postman, or yoga instructor was privileged. Not true. You may have a privilege for confidences you tell your doctor, spouse, or religious leader, but in the right circumstances, even those can be circumvented.” 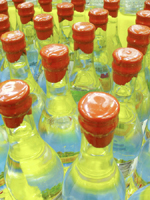 At Abnormal Use, Gallivan, White & Boyd associate Ammon Lesher wrote about a decision from the Cincinnati-based 6th U.S. Circuit Court of Appeals in which Makers Mark—which has produced bourbon whiskey in Kentucky and sealed its bottles with red wax since the 1950s—sued Jose Cuervo over its use of red sealing wax on its Riserva de la Familia tequila.

“Most people might be reluctant to challenge the strength and recognition of Maker’s Mark’s trade dress in a U.S. District Court in western Kentucky; but hey, too much tequila can make a man do strange things sometimes,” Lesher wrote. “At least Jose Cuervo was sophisticated enough to request a bench trial, taking out of play the risk that it would end up with 12 bourbon-loving Kentucky jurors. In a shocking turn of events, the district court found that Maker’s Mark’s registered trademark consisting of its signature trade dress element—a red dripping wax seal—was valid and infringed and enjoined Jose Cuervo from using any similar design.”