One aspect of a proposed Missouri law that would override federal gun laws would make it a misdemeanor to “publish the name, address, or other identifying information of any individual who owns a firearm” or who has applied for a firearm license, University of California at Los Angeles law professor Eugene Volokh points out at the Volokh Conspiracy.

This would have serious First Amendment ramifications, considering it would make it a misdemeanor for a newspaper to publish whether named accused shooters were using their own guns, whether “some legislator or commentator is being inconsistent in supporting gun bans while owning a gun (or having a concealed carry permit) himself,” or even for someone to write a personal blog post about going hunting with one’s own gun.

“And that is even if we read the statute as meaning that it shall be a crime to name a person as the owner of a gun or as a concealed carry license holder,” Volokh writes. “Read literally, the statute makes it a crime to publish the name of anyone who happens to own a gun, even if you don’t say that he’s a gun owner. … There really is no constitutionally sufficient reason supporting this speech restriction, and the restriction reflects very badly on the bill’s supporters.”

The way the ball bounces 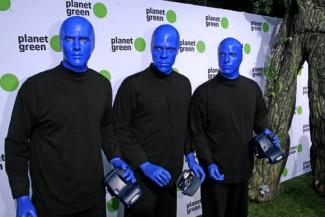 “The Blue Man Group is a musical/theatrical act which is well known for making music from unlikely objects (e.g. PVC pipes) and painting themselves blue,” Brett Snider writes at Legally Weird. “What they aren’t well-known for is injuring crowd members.”

But the act has been sued by a San Francisco audience member Stan Michelman after Michelman says he suffered “shock and injury to his nervous system” after having to unexpectedly raise an arm to keep a blue ball hurled into the audience from hitting his face, the blog reports, relying n an article in the Marin Independent Journal.

Snider thinks the Blue Men probably didn’t have a duty to warn audience members of this possibility: “the kind of danger Michaelman is claiming from a toy plastic ball in the audience isn’t reasonably foreseeable.” But Michaelman has also sued the venue, “likely under a theory of premises liability.”

It isn’t clear that the venue knew about the ball bit, though, Snider writes. And “to make matters worse, Michelman’s attorney reportedly ‘blue it’ by missing a court appearance and a filing deadline for his client in August.”

If a driver in Minnesota has two DWI convictions within 10 years—or one DWI under certain circumstances—the state can impound those drivers’ license plates and issue “whiskey plates” to them that they must use for at least one year.

“Whiskey plates are easily identifiable because they always begin with the letter ‘W,’ ” Appelman writes. “Typically the plates will begin WR, WS, WT, WX, WY, or WZ. These letters let law enforcement officials know that the vehicle has been subjected to one or more DUI stops.”

State police used to have the power to stop any car with a whiskey plate, but in 2003, the Minnesota Supreme Court ruled that officers must have a “reasonable articulable basis” to stop a driver with one of the plates.

But Minnesota isn’t the only state with this policy. Under Ohio law, judges in that state can also impound license plates of vehicles registered in the name of someone convicted of DUI. Ohio drivers in this situation are issued “party plates,” which are bright yellow with red lettering, according to the National Conference of State Legislatures.