This week, the Volokh Conspiracy (in the ABA Journal’s Blawg 100 Hall of Fame) migrated to the Washington Post. The blog was approached by the newspaper, and they accepted the offer in hopes that their blog will now reach a larger audience, blog founder and University of California-Los Angeles law professor Eugene Volokh wrote.

The blog will still be accessible for free for the next six months, but after that, users will have to either subscribe to the Post or be limited to the 10 page accesses per month that a free registration will get you. “Six months is the longest we could get,” Volokh wrote.

The blog is not ceding any editorial control over to the Post, but “we recognize that a few things will change, not because of their demands but because our attitudes to blogging will change in some measure. When someone else’s brand is at stake in what you write, you think about that before writing.”

Joshua Blackman says he tends to modify his style when he guest-posts. Blackman says the move is making him consider paying for the Post. He also notes that “the incentive to get a cross-link from Volokh/WaPo has just multiplied by a lot. Today, a link from Volokh, or Instapundit, may generate a few thousand hits in a day. That benefit will increase significantly.”

But Simple Justice’s Scott Greenfield says that the reader avalanche from a link on Instapundit and the like is overrated. “It can bring a huge number of day-tripper readers, but they aren’t readers anyone wants and, frankly, more likely to be trolls and nutjobs than anything else,” he writes. And he laments the Volokh Conspiracy’s eventual disappearance behind a paywall. “For those of us who do not have a .edu or .gov email, were regular readers of both posts and comments, and don’t plan to pay the Washington Post, the Volokh Conspiracy is gone.”

At the Indiana Law Blog, Marcia Oddi pointed out that The BLT: The Blog of Legal Times also announced a move behind a paywall this week. But she reminds us that Wall Street Journal’s Law Blog ditched its paywall last month. So who knows what the future holds.

A little innovation in how lawyers price their services can go a long way towards being a useful “tool to expand access to justice in a way that works for lawyers as well as for clients,” Washington, D.C., solo Carolyn Elefant writes at My Shingle.

While lawyers are reluctant to depart from the billable-hour model, Elefant thinks that dynamic pricing could be made to work. “For example, most lawyers don’t want to take on a case at the last minute. It creates added stress for the firm, leads to the possibility for error and a worse result for the client. Thus, lawyers who communicate and charge higher fees or an added premium for last-minute retention can incentivize clients to act timely. And if clients still insist on paying the higher fee, at least the lawyer is more fairly compensated for the opportunity costs of putting other matters on hold to complete the rush job.” Lawyers can also offer reduced prices to a certain class of clients or offer discounts to bring in business when it is slow. “What counts isn’t your hourly rate so much as your overall profit.”

Schemers at a glance

Ponzitracker’s Jordan Maglich announced this week his blog’s publication of The Ponzi Scheme Database, which is “intended as a list of all Ponzi schemes uncovered and/or sentenced in the ‘Madoff era.’” The database lists the perps and other vital statistics about Ponzi schemes in the last five years of $1 million or more.

“The numbers are almost unfathomable,” Maglich writes. “Since Madoff’s scheme was exposed, at least 500 Ponzi schemes have been exposed and/or seen their perpetrators sentenced to prison time.”

Among the statistics: The median scheme on Maglich’s list is $10 million; 90 percent of the perpetrators are male; and the median sentence (among the 360 or so who have been sentenced) is nine years. 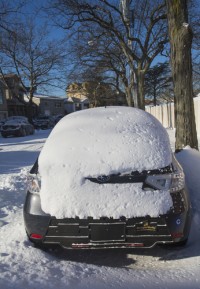 Chances are, you’ve seen some snow recently. After it’s been left outside, do you brush off only the windows or the whole car? In New Jersey, drivers who fail to brush the snow off their entire car can be ticketed, Stark & Stark lawyer Andrew M. Salmon writes at Personal Injury Law Journal. The law took effect in 2010, and more than 3,000 tickets have been issued since then, he writes.

“Hard snow and ice accumulations routinely fly off while driving, creating dangerous conditions for other drivers whose cars are struck by the flying object itself, or who get spooked while trying to avoid these dangers,” Salmon writes.

Tickets can range from as low as $25 in cases with no property damage and up to $1,000—$1,500 if you are a commercial motor vehicle driver— if snow blowing off a car results in property damage or injuries.