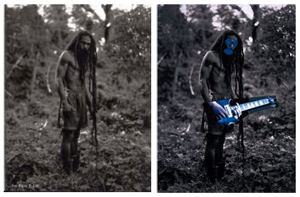 On the left is Patrick Cariou’s photograph from Yes Rasta.
On the right is Richard Prince’s piece, Graduation.

An artist to who altered copyrighted photos of Jamaican Rastafarians to create collages and paintings generating $10 million in sales has largely won a battle before a federal appeals court.

The New York-based 2nd U.S. Circuit Court of Appeals found that 25 of 30 artworks by artist Richard Prince were “something new and different” and they constituted fair use of the photos, report the New York Times and the Wall Street Journal (sub. req.).

To constitute fair use, the appeals court said in its opinion (PDF), a reasonable observer must find the work to be transformative. There is no need, the court said, for the secondary use to comment on the original artist or work, or popular culture.

The court found that five of the artworks were minimally altered and remanded for a determination on fair use. The ruling is a defeat for photographer Patrick Cariou, who had earned $8,000 from sales of the book that featured his Rastafarian photos.

“Where Cariou’s serene and deliberately composed portraits and landscape photographs depict the natural beauty of the Rastafarians and their surrounding environs,” the 2nd Circuit said, “Prince’s crude and jarring works, on the other hand, are hectic and provocative.”